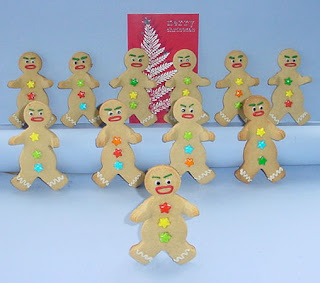 The gingerbread men were made using a gingerbread man cookie cutter of course!. His arms were supported during baking. This was achieved by folding a piece of card, to give it a slight rise and propping it under each arm.
The faces are piped using coloured royal icing and his buttons arecandy stars
For my Overseas readers Wikipedia's (the free encyclopedia) definition of the haka (and use in popular culture)

The haka is a traditional Māori dance form. The use of haka in popular culture is a growing phenomenon, originally from New Zealand. Traditionally, haka were used only in Māori cultural contexts, but today haka are used in a wide range of public occasions to impart a sense of importance of the event.
For over 100 years the All Blacks have had a tradition of performing a haka before games (see Haka of the All Blacks). This has become the most widely known use of the haka, but several other New Zealand sports teams now perform the haka before commencing a game. These include rugby league (the Kiwis), Australian rules football (the Falcons), basketball (Tall Blacks) and wheelchair rugby (Wheel Blacks)teams.
In addition to this planned, formalised usage, teams and supporters now often perform impromptu haka as a celebration or encouragement.
Photo Shows All Black haka before a match against France, 18 November 2006. The All Blacks won the match 23-11. (courtesy Wikipedia commons)
Posted by Kiwicakes at 12:01 AM