On the eighth day of Christmas my true love gave to me.......Eight plants of puha 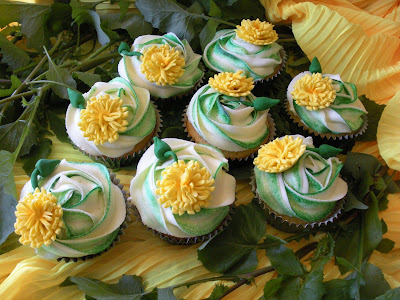 These lovely puha cupcake were created using green foil cupcake cases The top is piped with a Wilton 1m piping nozzle using icing that has been variegated with leaf green icing colour. Each puha flower is created using a daisy cutter whi has had each petal cut (the centre layer has the ends cut off). They are created using white fondant icing which has been coloured with lemon yellow ; a touch of golden yellow icing colouring in to which you need to add some gum trag or tylose for strength to prevent drooping. 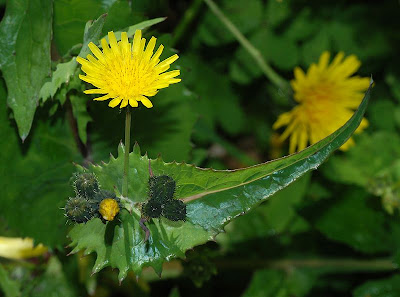 Puha -Sow thistles have been used as fodder, particularly for rabbits, hence the other common names of "hare thistle" or "hare lettuce". They are also edible to humans as a leaf vegetable; old leaves and stalks can be bitter but young leaves have a flavour similar to lettuce. Going by the name puha or rareke (raraki) it is frequently eaten in New Zealand as a vegetable, particularly by the native Māori. When cooked it tastes a little similar to chard.

Sow thistles (less commonly hare thistles or hare lettuces) are annual herbs in the genus Sonchus, after their Ancient Greek name. All are characterized by soft, somewhat irregularly lobed leaves that clasp the stem and, at least initially, form a basal rosette. The stem contains a milky sap. Flower heads are yellow and range in size from half to one inch in diameter; the florets are all of ray type. Sow thistles are common roadside plants, and while native to Eurasia and tropical Africa, they are found almost worldwide in temperate regions. Like the true thistles, sow thistles are in the family Asteraceae.
Posted by Kiwicakes at 12:01 AM