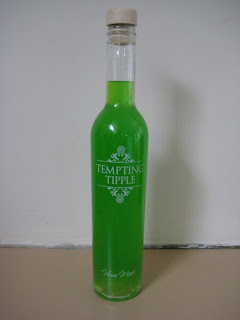 As soon as I saw this "Tempting Tipple" bottle, I just knew I wanted to create my own tipple. I considered Limoncello (and that may be my next adventure) but I settled on infused vodka. I recall people have been infusing vodka with skittles since I was a teenager (and probably before that too, but I was too young to take any notice) 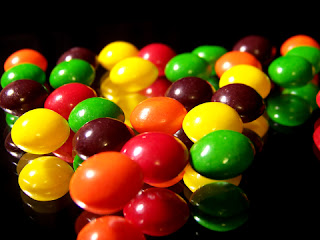 You all know Skittles right? they are the fruit flavoured candies, the purple one almost appears dark brown/black 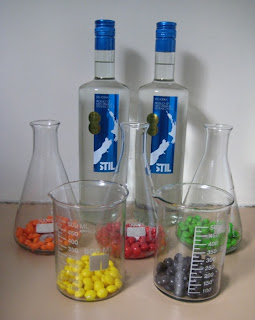 I took 6x small packs of Skittles and 2x 1litre bottles of NZ Stil vodka. Not being a vodka connoisseur I set off to Liquorland just down the road in search of the spirit, there was a lot to choose from - some which might be considered a premium brand was quite expensive, and this brand was only 2 for $60 - I'll admit I fell in love with the NZ map on the bottle, but the gold medal award from the World Spirit competition in San Fransisco told me despite the price it was probably pretty darn good. 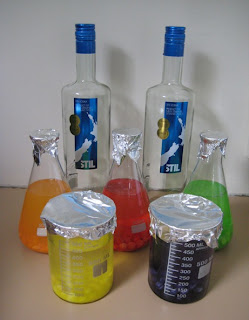 I separated the 5 flavours, and popped them each in their own flask - I'll admit any jar would do for the infusing stage, but I couldn't resist the look of my "science experiment" in the Kiwicake's test kitchen. 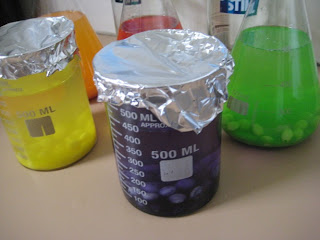 Normally it just takes 24 hours, but mine got to sit all weekend as on the day I intended to decant it, we were short staffed. This resulting mixture needs filtered (I used a coffee filter - an enormous pack of unbleached filters was only $2 at Bin Inn), if you still have white "bits" floating in it, just filter a second (third or fourth) time until your mixture is free of any foreign "bits" you may get a bit too much sludge, making the straining process slow, in which case, I just switched the mixture over to a fresh paper filter. 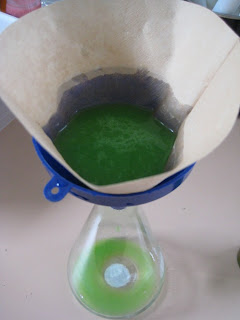 As rainbow parties are so popular at the moment, this would be perfect for the ADULTS only - I suggest keeping it out of the reach of children as the colour is very inviting.

If you're not sure what Skittle flavour vodka you might like, try popping just a few of each candy in to a shot glass with a shot of vodka, this quick method will allow you to see which single flavour you might wish to go ahead with.
The green skittle candy made a very sour vodka, the other 4 were quite sweet. 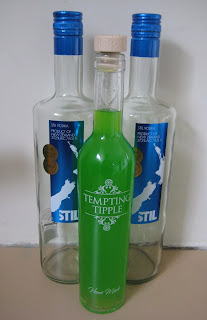 I think the tempting tipple bottle would be lovely for a gift with any creation in it, but I'm thinking home made vanilla extract - made by placing vanilla beans in vodka would also be gorgeous. A great idea for a Christmas gift made with love.

Posted by Kiwicakes at 4:03 PM