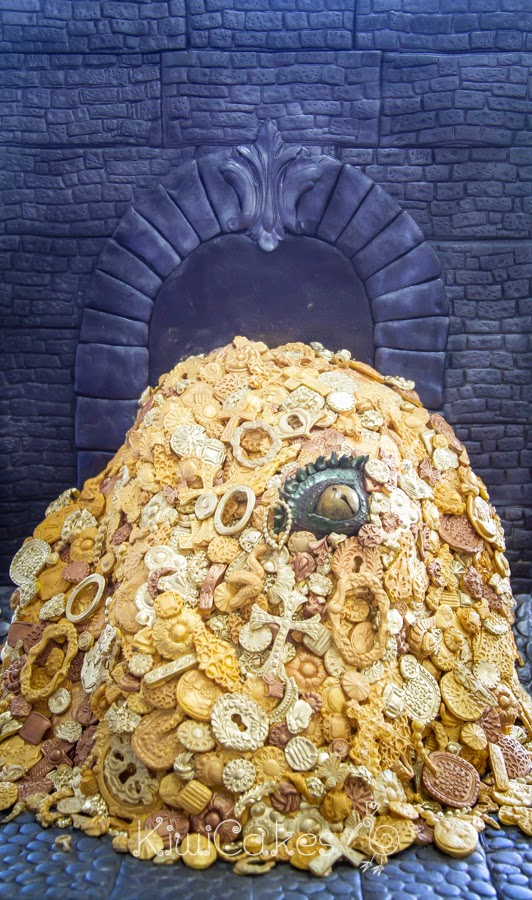 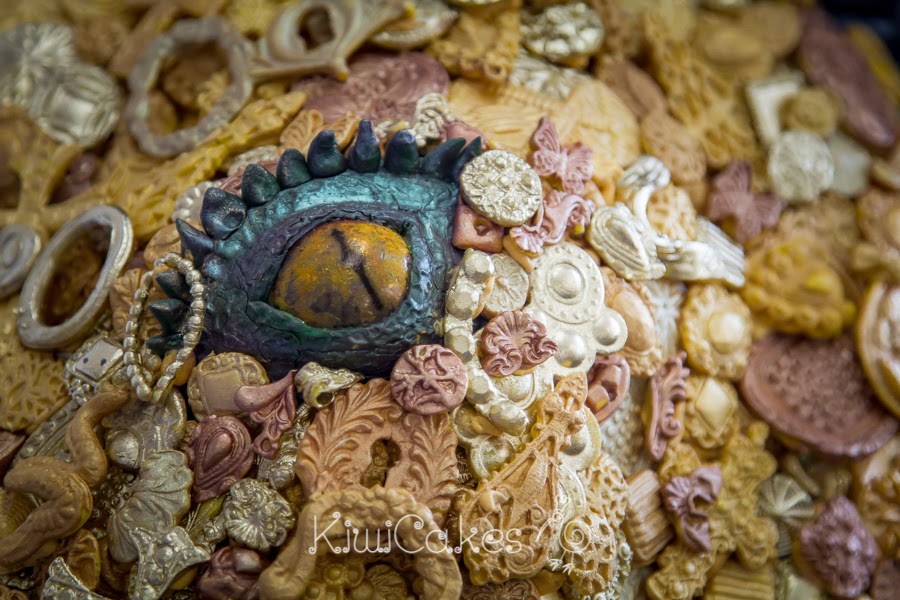 Last month in early December 2014 a Peter Jackson tribute cake collaboration was released here in NZ. Organised by Mel Todd of Take The Cake 31 sugar artists from around NZ paid tribute to Peter Jackson in cake & sugar form. Cakes spanned the entire gamut of all his movies, you can see them all at the Cakes From Middle Earth website.

I chose to do the scene from the very end of The Desolation of Smaug when the camera pans in to an enormous pile of treasure and the huge eye of Smaug blinks open.

I had so much fun being a part of this cake collaboration, with old friends and new friends from around NZ. I enjoyed chatting with these ladies daily, as we shared the trials and joys of small successes & the odd drama along the way creating our cakes.

I never imagined my cake would take so long to make. Now don't get me wrong I thought it would take a reeeeeeeeeeally long time, but it took even longer. 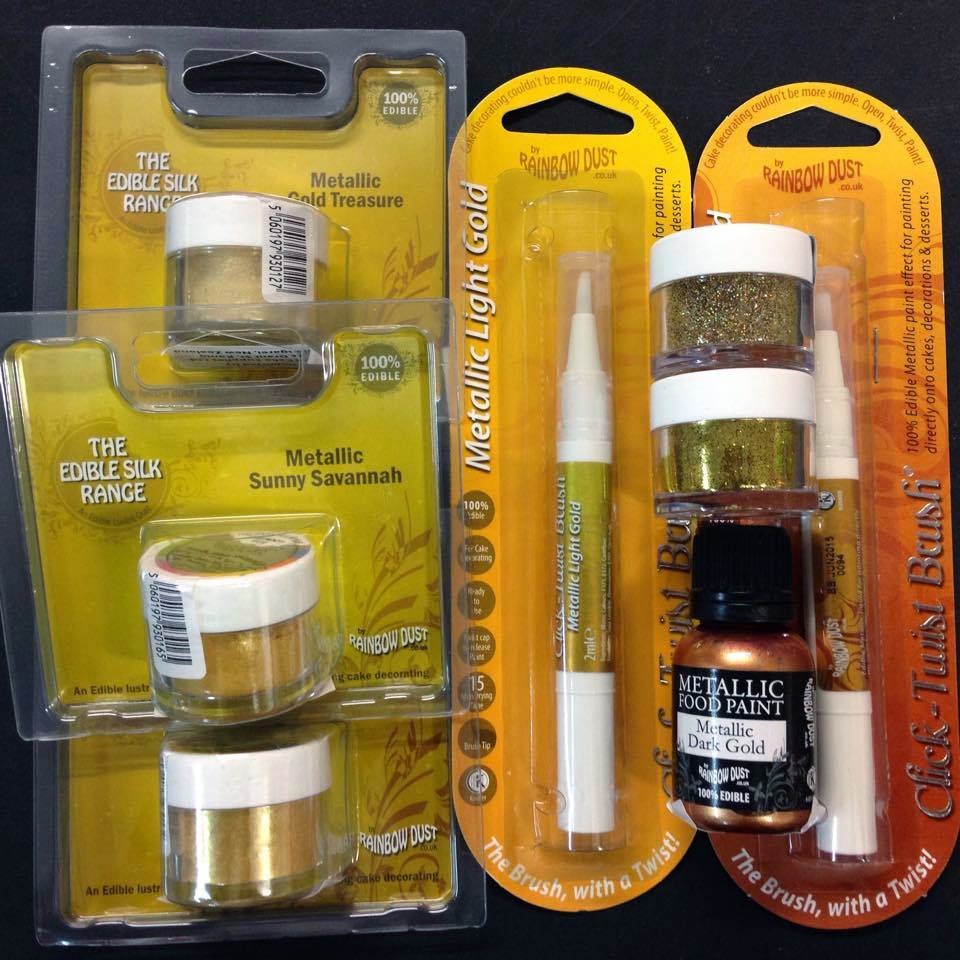 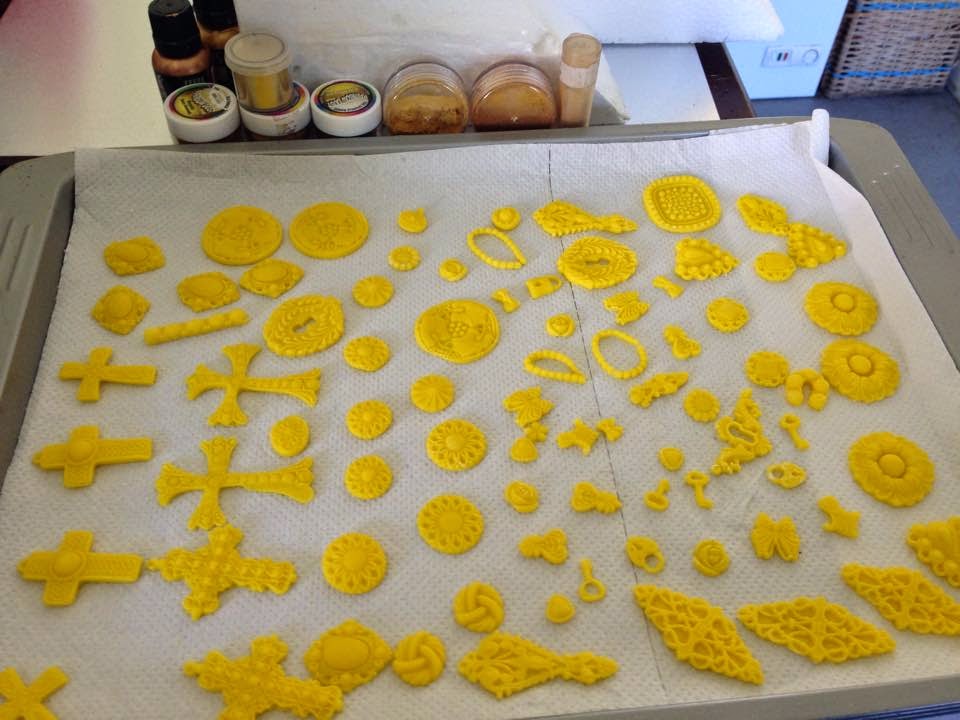 Initially I made up 4 large trays of jam packed treasure, aprx 200 pieces per tray (yellow Satin Ice fondant, with added tylose to harden) which I then coloured with many shades of Rainbow Dust gold paints, glitters & lustres. Along with a little gold leaf. 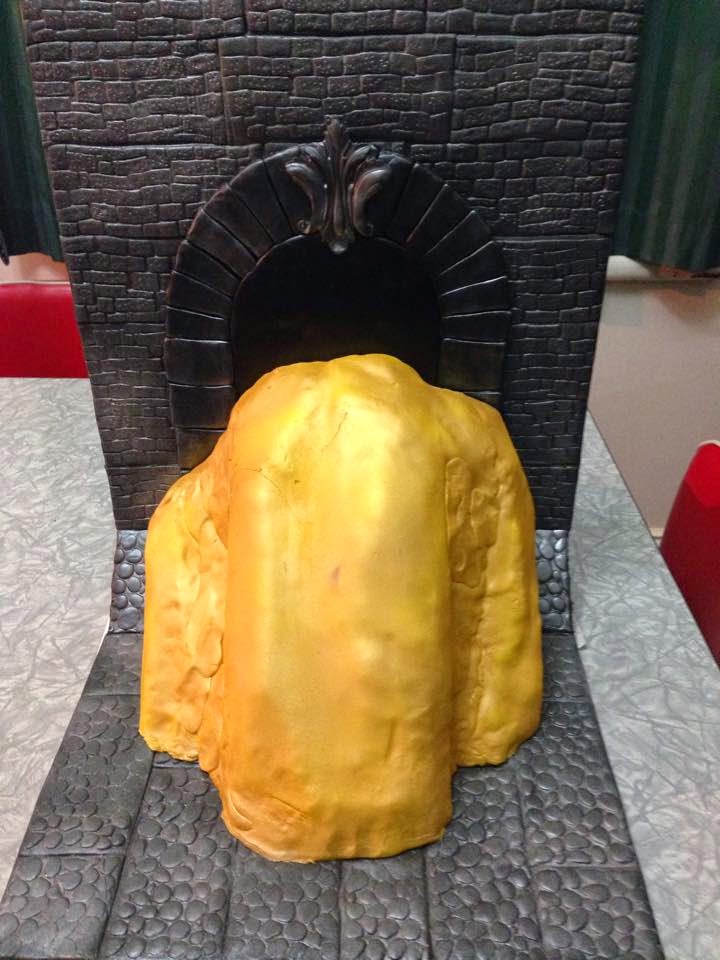 As I began to pile the treasure on to my mountain, it quite clearly became obvious I need more than twice as much. so in total there was over 2000 individual pieces, although you'd never guess it from the photos. 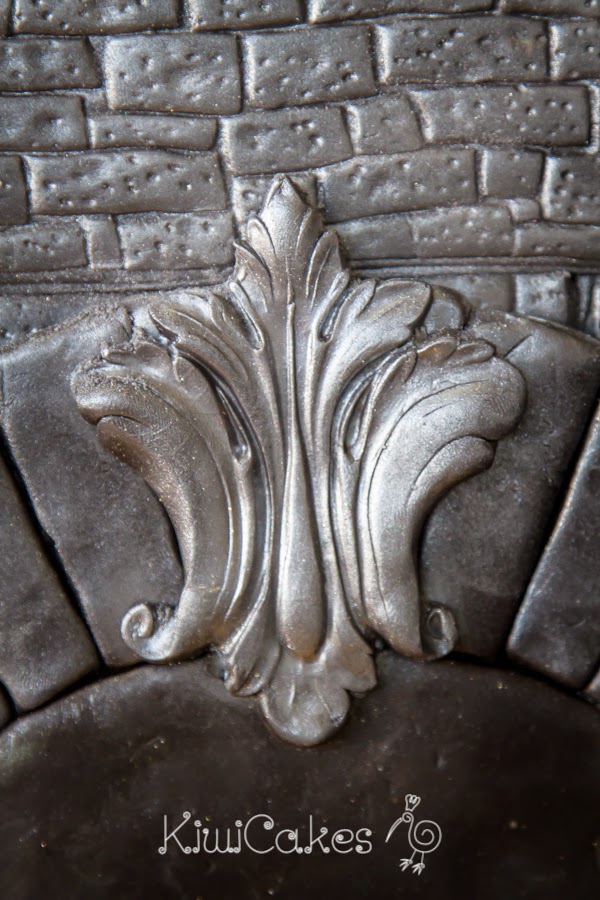 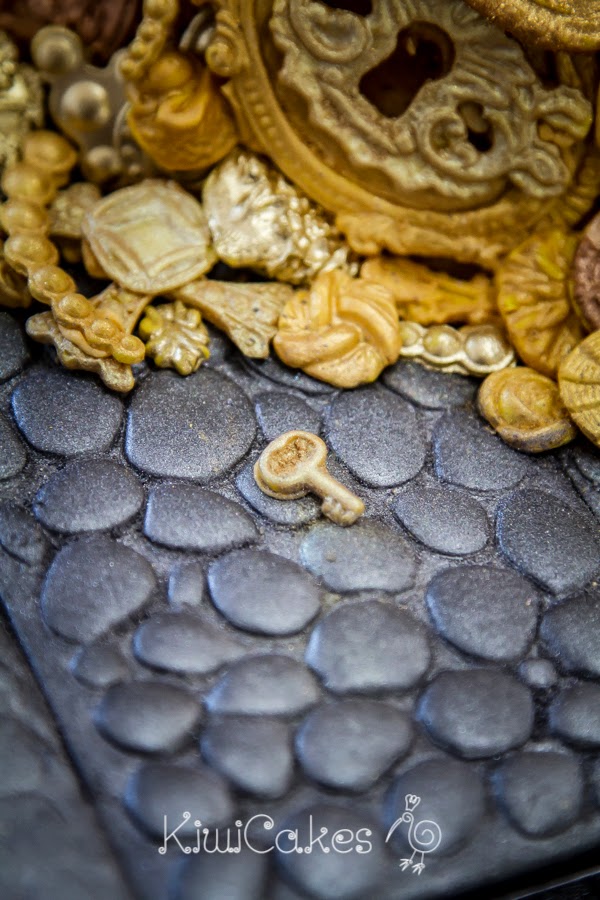 The back board & base board had fondant panels embossed with this simple FMM impression mat set which were dusted with a mixture of Rainbow Dust starlight silver satin & Metallic Dark silver lustre dusts. The keystone finial was made with this mould 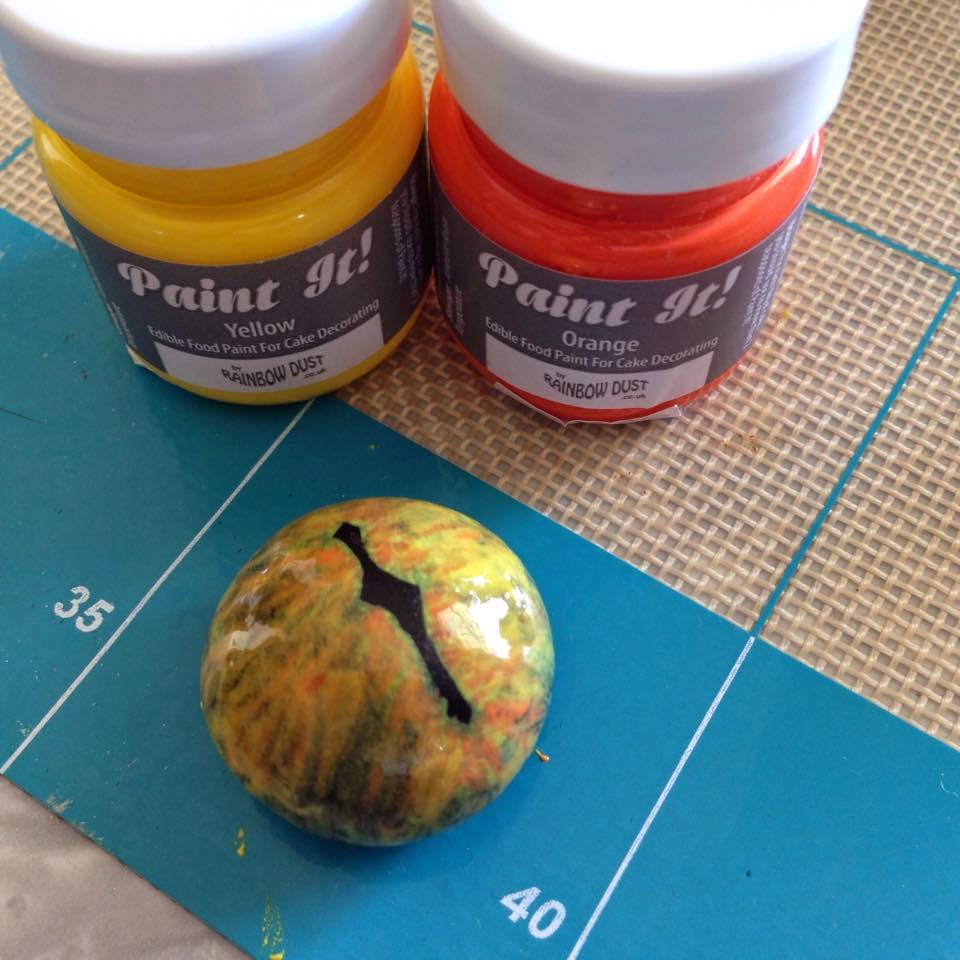 Smaug's eye was made from black Satin Ice fondant, which I glazed with confectioners glaze prior to painting and again afterwards. It was painted with edible Paint It from Rainbow Dust. (initially I painted an eye without glazing it first, but the black of the fondant dulled the lighter paint colours) 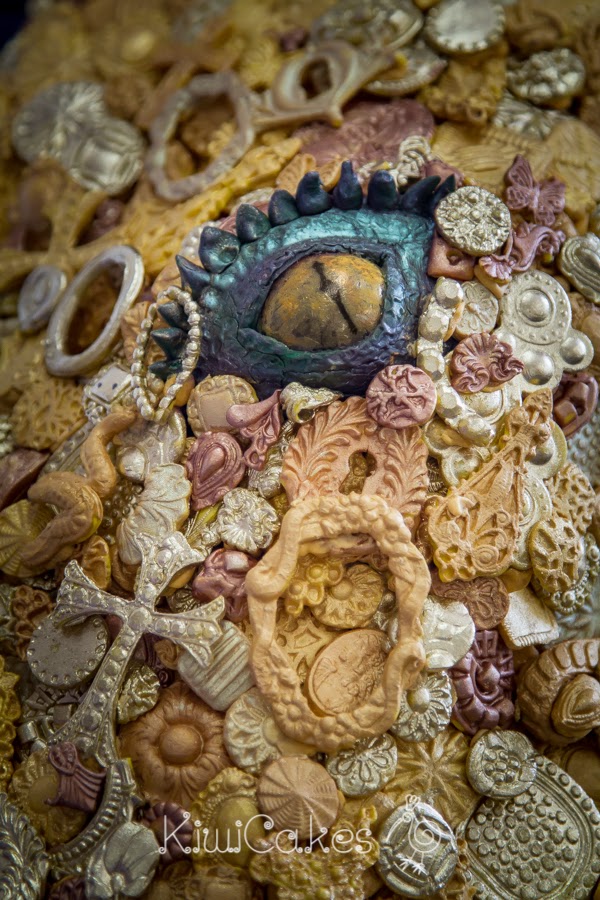 The green part of Smaugs dragon skin that is visible is green Satin Ice fondant mixed with a little black Satin Ice to darker. I added tylose to harden. Whilst the fondant was soft I rolled a crocodile skin impression rolling pin over the surface gently. Then I brushed the surface with red, green and copper lustre over his scaly skin, to create a lizard-like appearance. 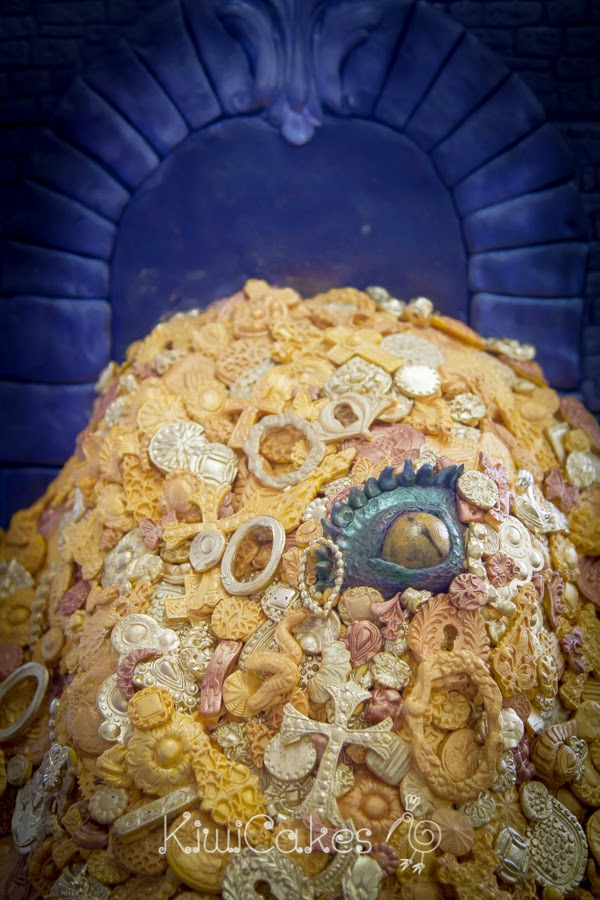 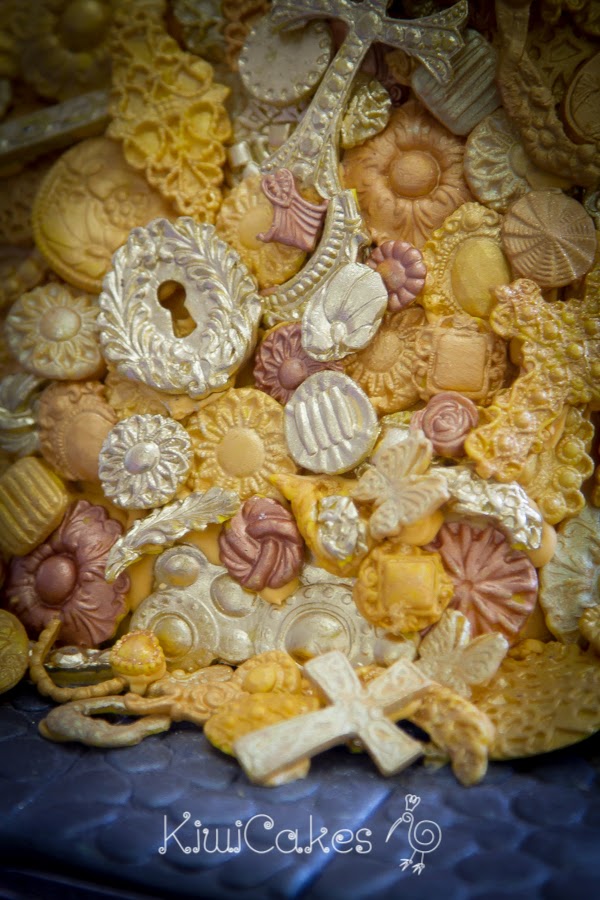 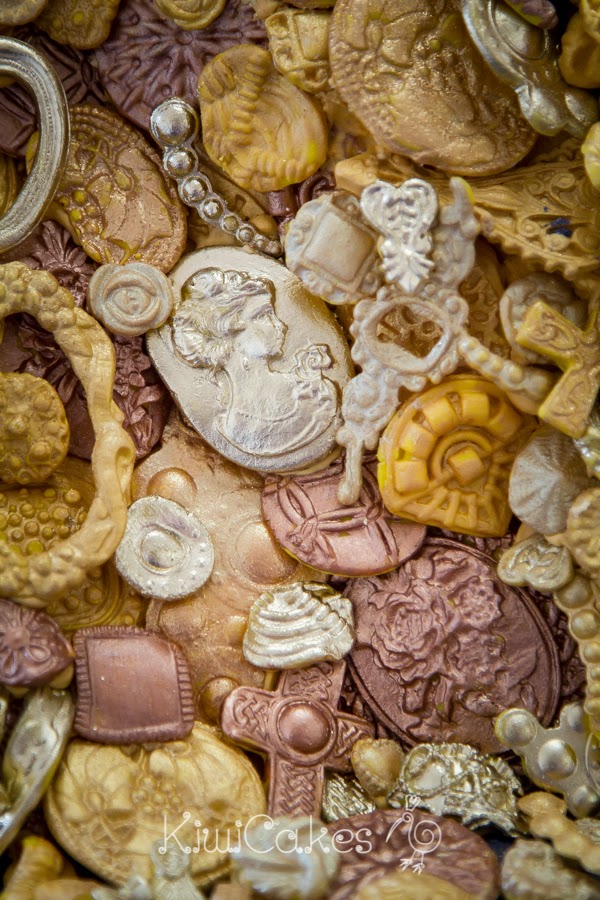 The treasure was made using silicone moulds, at times I pressed my fondant icing in to only part of the mould, to make small "broken" or sectional pieces, to give a little variety 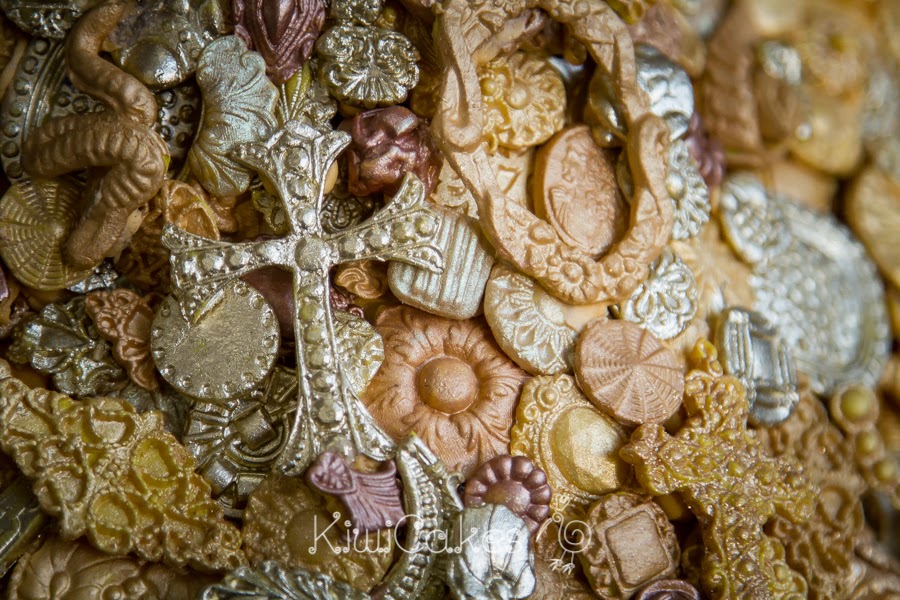 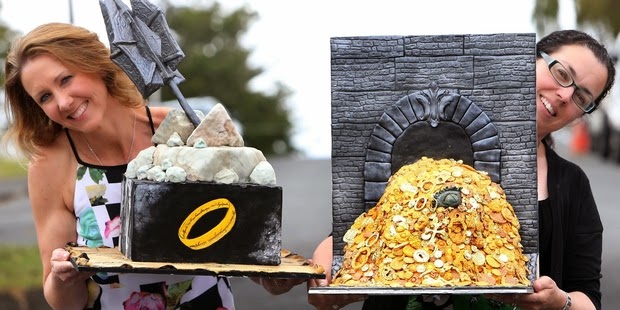 Our collaboration has had some amazing press coverage around the country in many newspapers. Kim (also from Whangarei) and I, were featured in The Northern Advocate newspaper. Click here for the story. And a group of us were also featured on Campbell Live TV. Unfortunately with only a few hours notice not everyone could make it to Auckland for the filming in time. Click here to watch the TV show (the cakes feature over 3 separate slots throughout the TV show) 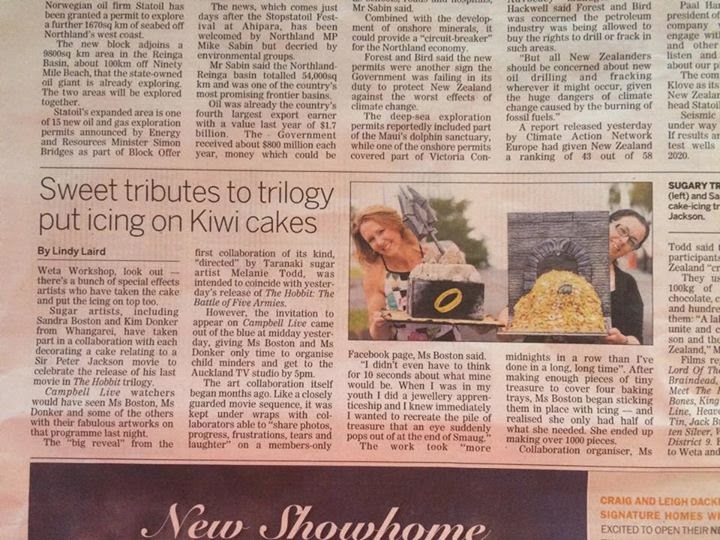 Posted by Kiwicakes at 9:35 AM