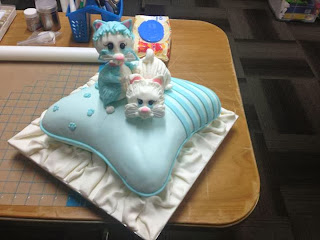 Early in 2013, I spent three days with Debbie Brown from the UK particpating in three different cake workshops. The kitten cake workshop I did called for a pillow cake or cake dummy. Unable to find a cake dummy in NZ, I decided to make my own using rice bubble treats.

I used this recipe for rice bubble treats from the manufacturers of the Marshamllow fluff  a batch of mixture in to the 10 inch Wilton pillow pan from this set of cake pans (which I had lined with plastic wrap). I allowed it to set for a few hours. 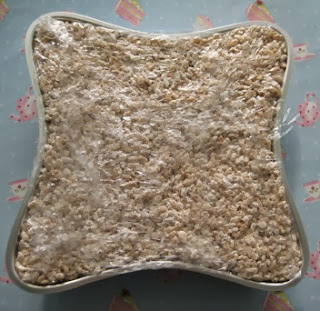 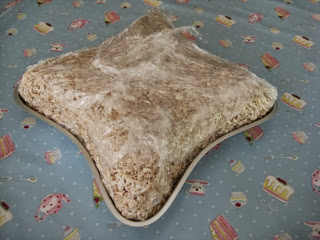 Once the pillow had finished setting, I covered the entire pillow in white chocolate, so that when the fondant covered the pillow, the surface would be nice and smooth. 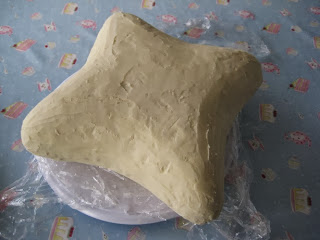 I was very happy with my finished pillow shape. It was a lot easier to work with than a pillow shaped cake. 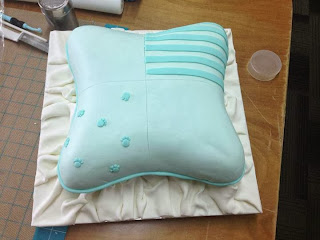 Here it is covered in fondant, part way through my workshop with Debbie Brown. 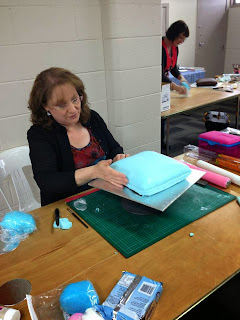 Here's a lovely photo of Debbie part way through hers. She used actual cake and carved it. I hadn't wanted to deal with all the cake mess during class, hence why I opted to take along a ready made dummy cake.

Posted by Kiwicakes at 1:58 PM

Email ThisBlogThis!Share to TwitterShare to FacebookShare to Pinterest
Labels: Debbie Brown, fondant, How to, My cakes, tutorials