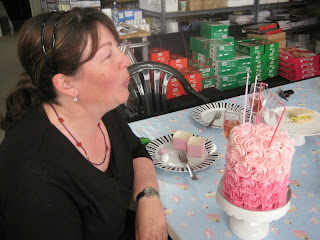 Last Friday we had a birthday party for Jenny, the office manager here at Kiwicakes. Jenny is a highly valued member of staff, she's also been my best friend since high school - we've been through a lot together. Jenny is older and wiser than me by 8 days. We had a joint 21st birthday party, which seems like a million years ago. If someone had told us we'd be working together nearly 20 years later, I'm sure we would have laughed at them. Jenny & I were each others bridesmaids and provided support for each other after the birth of our children. Jenny is the reason Kiwicakes runs so efficiently and everyones orders get out on time. We're very lucky to have her. 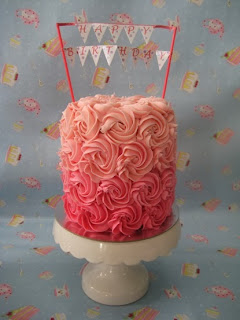 I decided on a pastel theme because I knew Jenny liked the ombre rosette cakes. Whilst I would've adored to spend hours on a special cake, the reality was I had just a few hours to pull the entire cake and party food together, due to other commitments during the week. This blog post has the recipe and decorating ideas for Jenny's cake. A later blog post will detail her party food and candy buffet.

Jenny's cake was a white chocolate mud cake, which I hadn't made before. I looked around at a few recipes, but when I didn't find anything I liked 100% I adapted one to suit my needs. The cake was made using two 5 inch round cakes, torted and filled, to create three layers of filling. 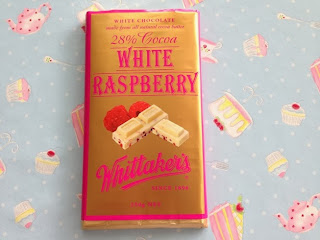 Preheat oven to 160C.
Heat milk until hot, but not boiling, stir in white chocolate until melted, stir in vanilla. Set aside to cool.
In a bowl sift together flour, salt & baking powder.
In mixer, cream together butter and sugar until light & fluffy. Beat in eggs one at a time, mixing well with each addition. Add flour mixture alternately with the milk mixture, mixing until just combined.

Pour into two greased 5 inch diameter pans or one 8 inch diameter pan. I use Wilton Cake release to grease my pans, it ensures they never stick. I also use Wilton bake even strips to ensure the cake rise level & flat and need little or no levelling after they're baked. 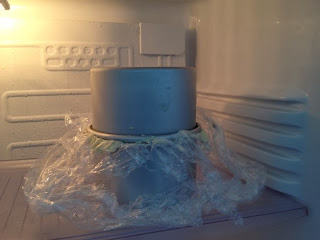 Once baked and cooled I cut each cake in half and added a layer of filling. As the cake was taller than it was wide I knew it would not stack easily without dowelling (which I didn't want to do for this tiny cake). My solution was to place each torted and filled cake back in to its cake pan, which I had lined with glad wrap. I then spread a layer of filling on the top of one cake and inverted the other cake pan on top. I placed the two cake pan stack into the fridge, to allow the cake set up overnight. I removed it from the fridge the following morning and it held its shape beautifully (chilling chocolate mud cake overnight actually improves the flavour). 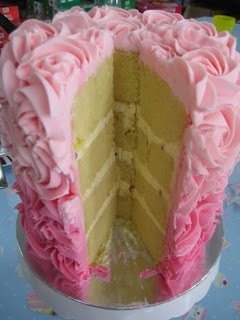 In a mixer cream together butter and shortening until well mixed, the resulting mixture will be significantly whiter than butter. Add icing sugar 1 cup at a time, alternating with 1 Tbsp water. Add vanilla.
Take 1 cup of icing and colour it to your darkest pink. Once your first row of rosettes has been piped, you can take the remaining icing and add white icing to it, to make the next shade lighter for your rosettes. Repeating as many times as you need until your lightest shade is reached.

The little cake banner bunting can be found here 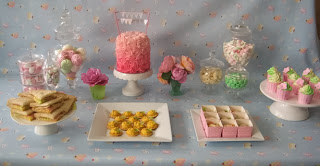 Posted by Kiwicakes at 1:24 PM