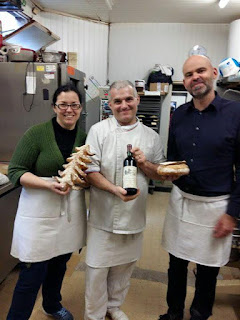 During my time in Paris I experienced a three hour baking class in the Parisian bakery Le Petit Mitron 26 Rue Lepic, 75018 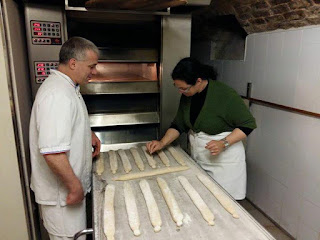 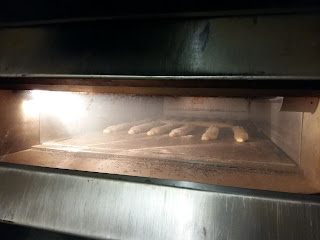 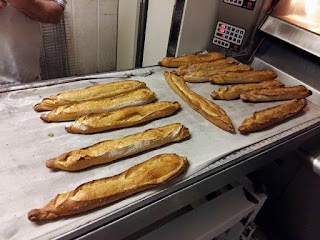 Didier's bakery held one of only 12 patents for the Paris Baguette. And I can say the taste of this baguette far surpassed any baguette I had tried in France thus far. The Paris Baguette is the first item we learnt about. The dough is left to prove for 24 hours, enhancing it's flavour. When the baguettes have been shaped, a little bobble is left at the very end, this is one identifying features of the Paris Baguette. The other feature is the slash mark. It must always be the same, one smaller diagonal slash and one long slash. Didier asked me to try slashing one - he then pronounced my technique perfect and asked me to do them all. He asked was a surgeon?, or did I work with my hands?. Later when I attempted to slash the regular baguettes - the feel of the dough was much different, I had expected it to react the same, but under the razor the texture was much grabbier (my best attempt at explaining the difference), I found them harder to slash. 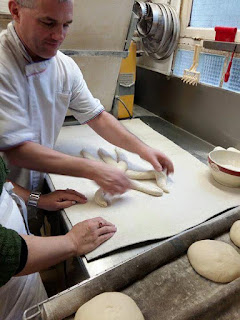 My slashing must have been OK, as all of my work went out on sale in the bakery that morning. We also plaited larger loaves for sale, which sure was fun. I learned that regular white French flour has a lower gluten content than NZ flour. We even tasted chestnut flour. 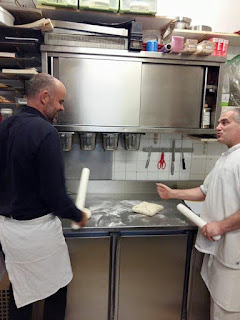 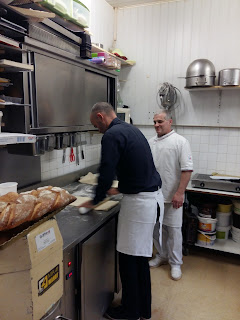 Vaughan made the pastry for our croissant and pain au chocolat. However he was declared too tall to work in the bakery properly, without getting a sore back. 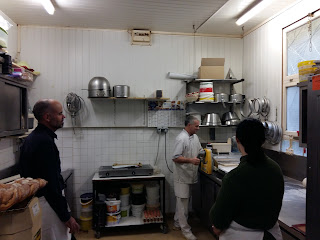 Didier rolled out the pastry in a sheeter. And then Vaughan and I set to making croissants and pain au chocolate 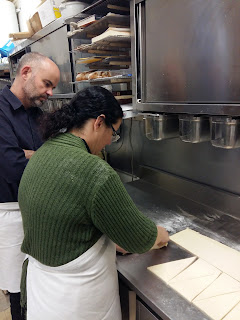 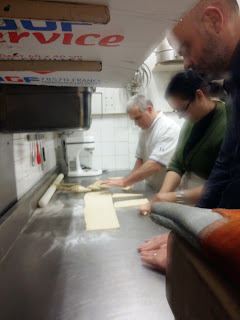 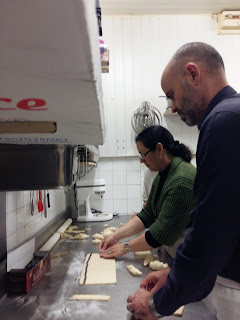 I enjoyed looking at all of the French baking suppliers and the dark chocolate sticks we used for the pain au chocolat sure were tasty. When I explained to Didier I wanted to make chouquettes and asked where I could buy the special sugar grains, he promptly sent me home with a bag full. A chouquette is a choux pastry, unfilled with sugar grains baked on top, they are very inexpensive to buy around 1.50 Euro for 5. I'm going to attempt making them over the Christmas holidays. Didier said in the bakery, they made them and froze them awaiting baking at busy times. 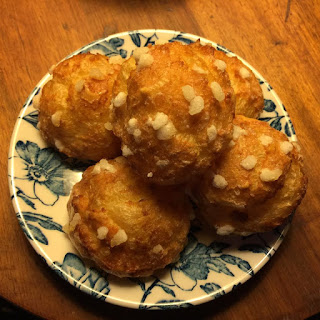 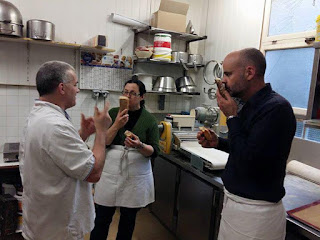 Didier encouraged us to SMELL everything. We left our baking class with sore cheeks from all the laughing and a bakery bag stuffed with three types of baguettes, croissant and chouquettes. 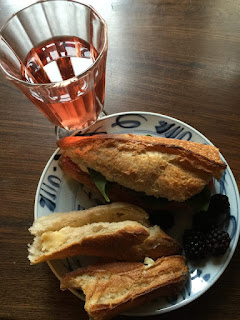 My Paris baguette made an easy dinner that evening, when I lay collapsed in our apartment - too tired to go out. Accompanied by a French Rose it was divine. It was lovely filled but equally great with a little butter only.
Posted by Kiwicakes at 11:23 AM