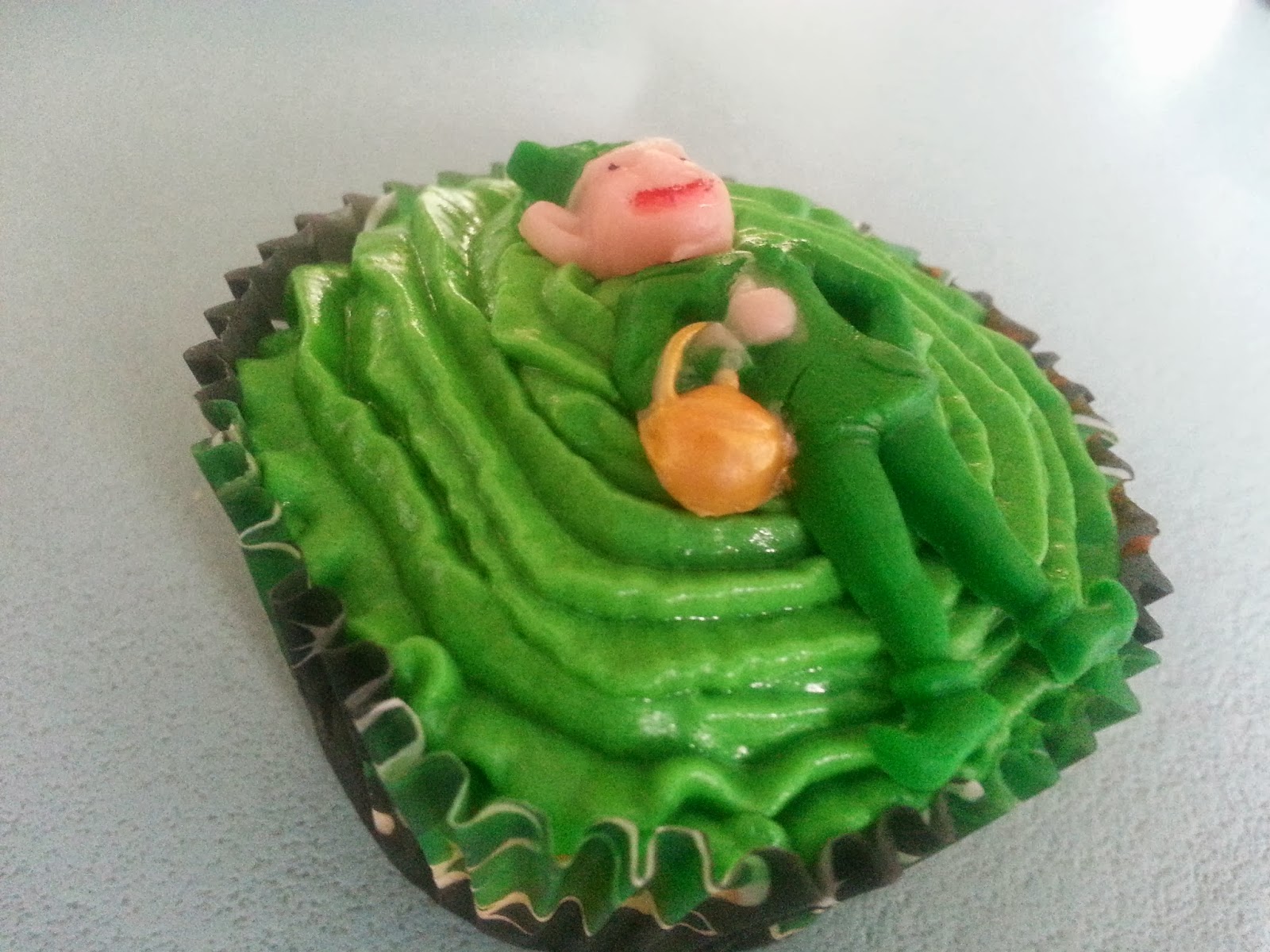 This crazy little leprechaun is achieved with a silicone mould, which has arrived just in time for St Paddy's day! Its just a case of pressing fondant in, snap-freezing him, then finishing with the detailing. He is presented a top these cool shamrock cupcake papers. 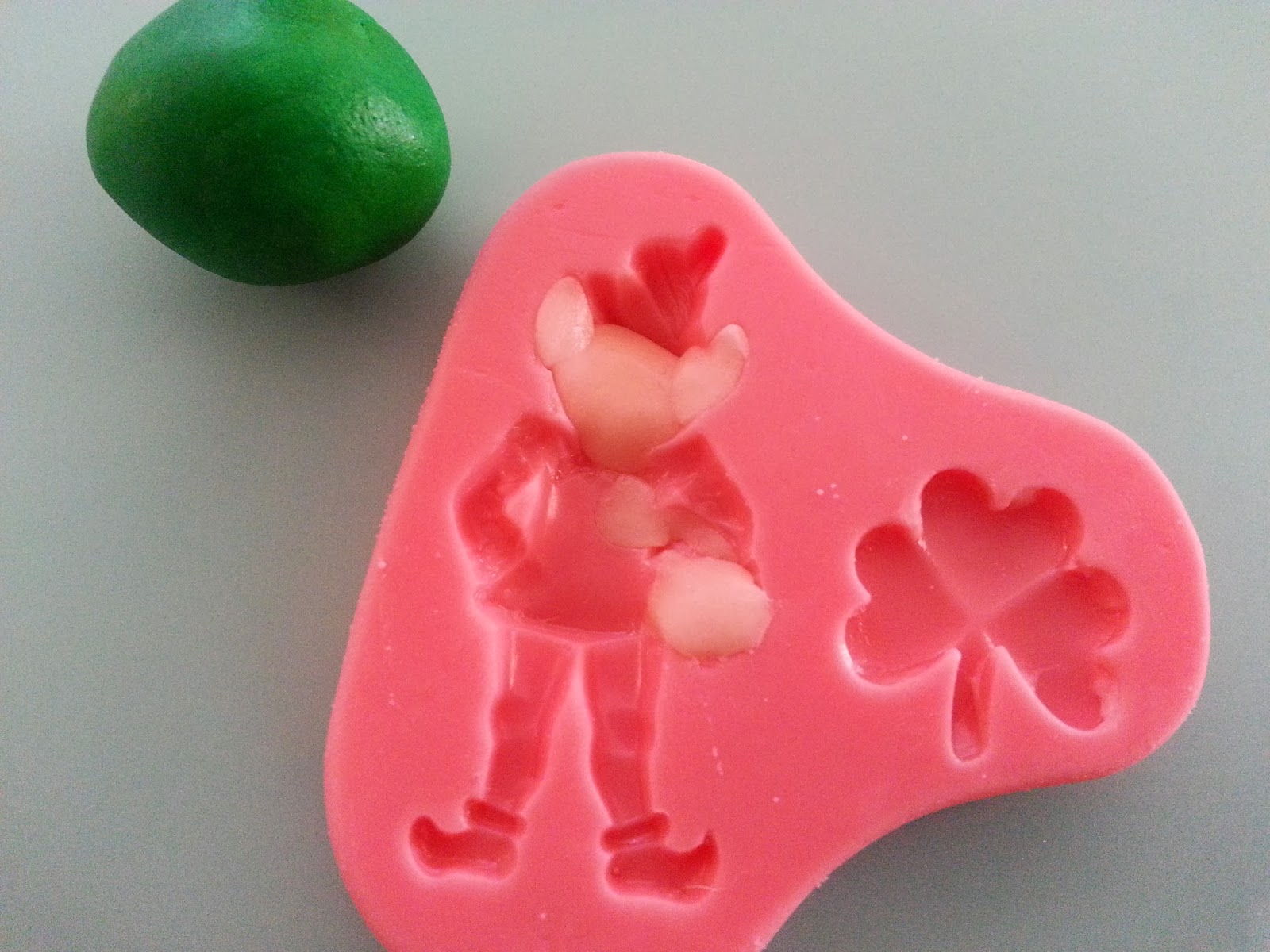 Firstly with any new mould, give it a wash in hot water and let it air-dry. Then season it with a smidgen of crisco vegetable shortening for guaranteed easy-release. Use tiny balls of flesh coloured fondant and press them into your little man's face, ears, hand and pot as pictured above. Roll a thin sausage for the pot's handle and press into place. I love this pre-coloured fondant for skin tone because so many times I have mucked around with a small amount of my peaches and browns and can't seem to get the colour quite right. It also works well as a warm base colour for edible metallic light gold paint as you will see further down the blog. 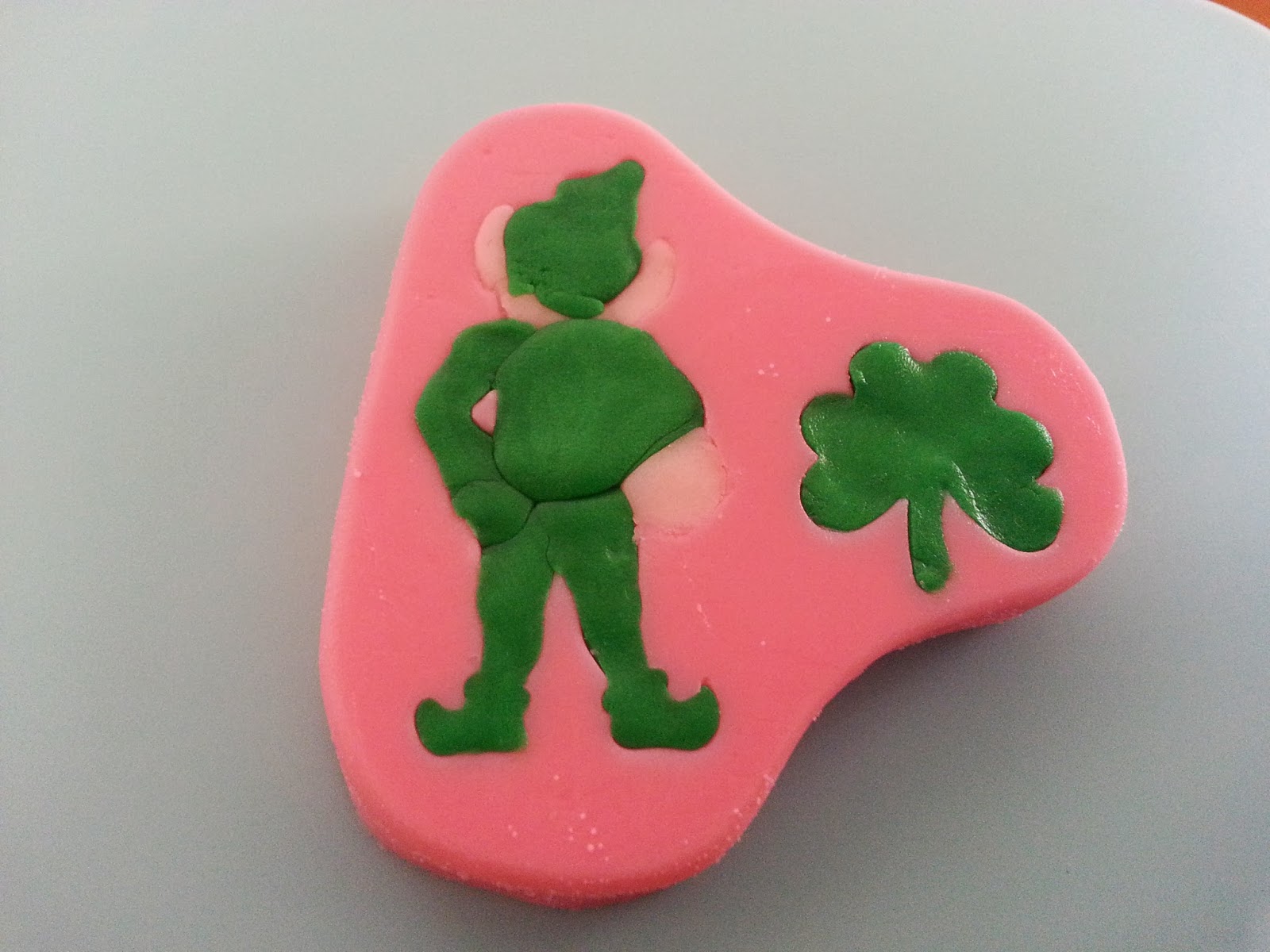 Next I pressed green satinice fondant into the remainder of the mould.. He only weighs a few grams when completed so we are only talking about tiny amounts of fondant here! When the cavities are full, sit the mould in your freezer for a couple of minutes to firm up the fondant before turning out to release the funny little leprechaun and clover leaf. Release the feet from the leprechaun mould first and then the rest of his body will follow. Use a scalpel to do any microscopic tidying if your skin tone and green have spread a millimeter or two in the wrong direction. 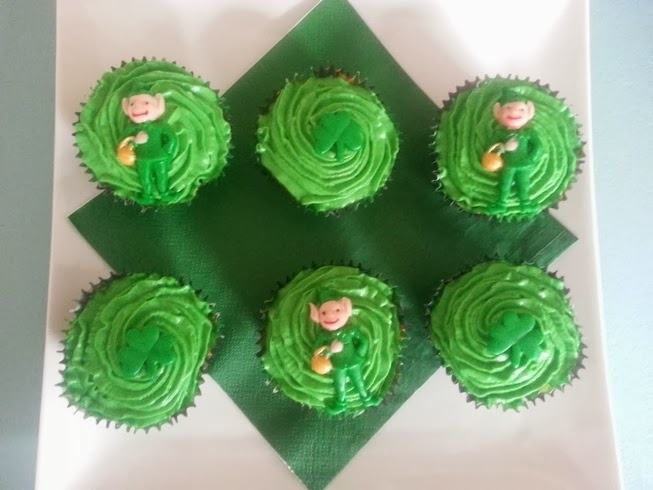 I used light gold metallic paint and the finest paintbrush to highlight his little pot of gold. When he has been at room temperature for a good half an hour he will have hardened with a slight crust all over. Now its time to add wee dots for his eyeballs with an airforce blue edible marker pen and his smile with a red edible marker pen. I tried to do the facial features on mine too early when they were still too 'fresh' and ended up with less-than-perfect lines so it is worth waiting if you have that luxury. 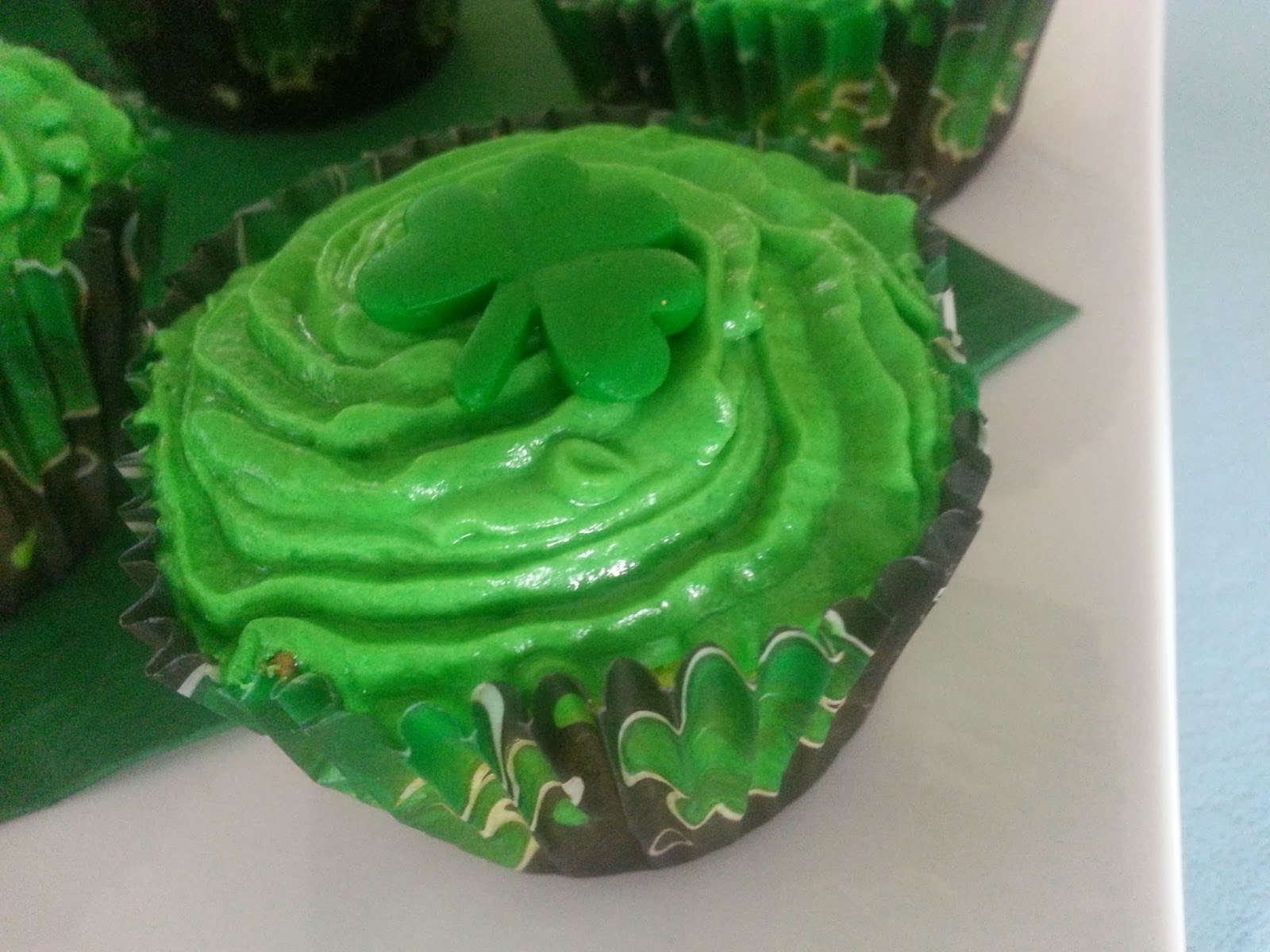 The shamrock silicone mould (included alongside the leprechaun) is super-simple to use and looks really effective with these themed cupcake papers. 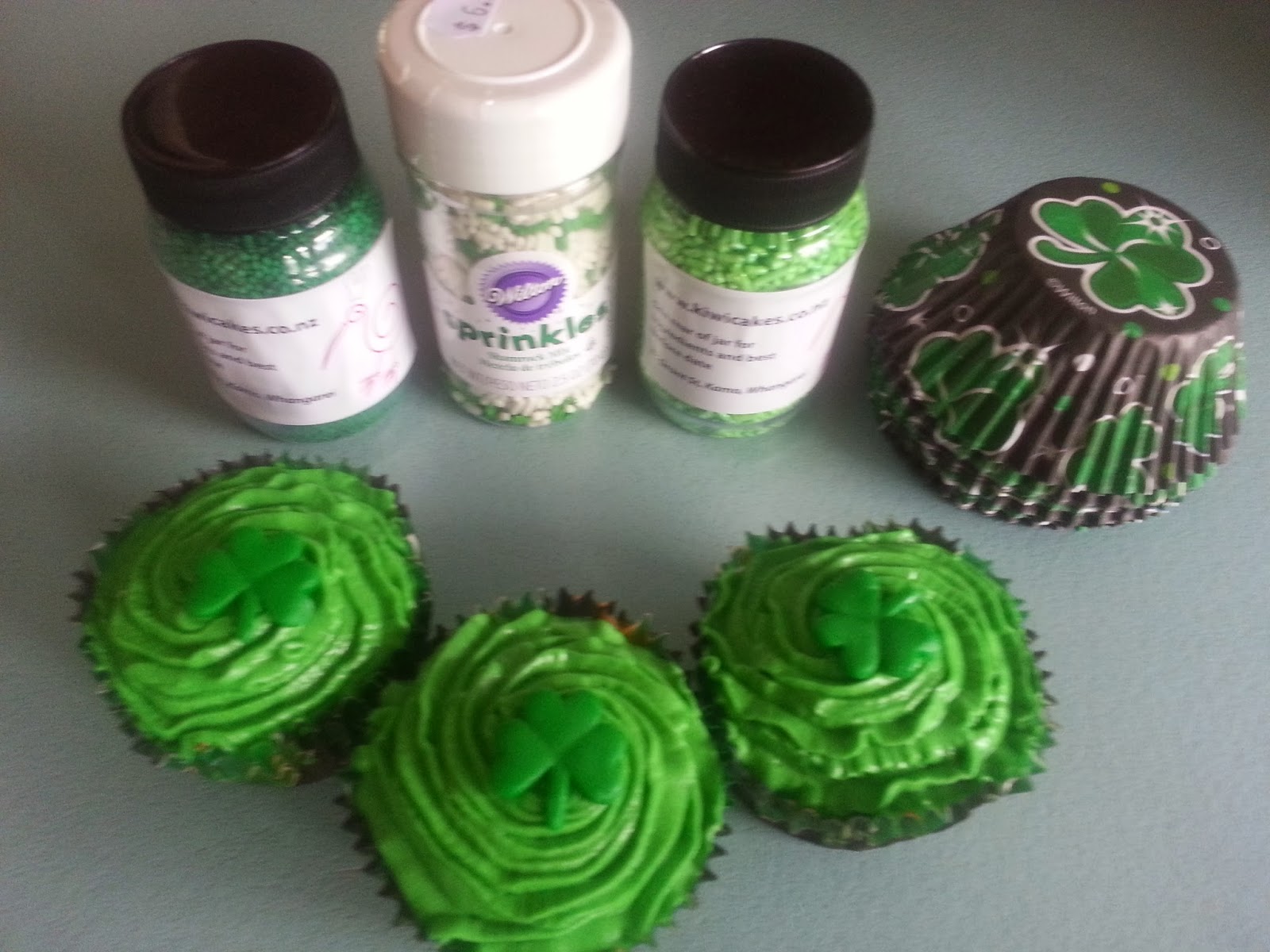 You could jazz these cupcakes up even further with the addition of some sprinkles. L-R...

You will be a hit in the office if you arrive with a tray full of these green goodies next Monday!