The wedding of Mr & Mrs Stanners 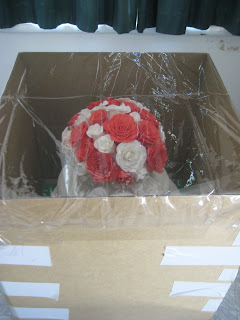 This weekend past, I made my first ever wedding cake. In the recent years that I've been involved in Kiwicakes, none of my friends have got married, they're either married, not getting married, or haven't found someone yet. So when my good friend Jodie announced she was engaged, I offered to make her wedding cake, as a wedding gift. At the time I offered, I did not know this cake would be travelling to an island - would I have still offered if I knew? - YEAH PROBABLY!
Kiwicakes chews up the majority of my life and these days, I have little time for cake making, apart from for the kids - I had made a total of about 5 roses in my 12 year cake making hobby, so this was a big step for me.
The cake design was a collaboration of some design ideas the bride to be had seen in magazines, but the final design was not copied from any one cake. I covered the cake in white Satin Ice on Thursday afternoon, in the worst humidity ever (in the middle of a storm) - the fondant was like bubble gum, I was tearing my hair out, I could not use a smoother - as it was simply sticking to it - but with no time to spare, I forged on. And what looked bad on Thursday night, did not look as bad on Friday morning. By Friday night when it was covered with roses, it looked 100% better - and many of the pits/ripples that were a result of the terrible humidity were covered with roses. So I can say I was almost satisfied with the cake, I doubt anyone else noticed the less than perfect finish on the white fondant - except for me.  The most important thing was the bride & groom loved it. And I can now officially say I have made a wedding cake. 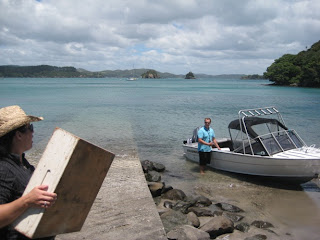 The groom picked us up at a tiny coastal town Rawhiti - 1 hour North East of my home - it took me a little over an hour to drive the road - as there are many hair pin bends, stretches of gravel road and pot holes. The boat was small - but fast 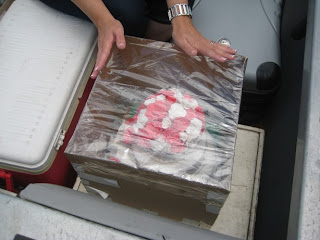 The groom assured me the back corner of the boat was the most stable spot. Thank goodness the top was covered in cellophane - it got covered in salt spray. 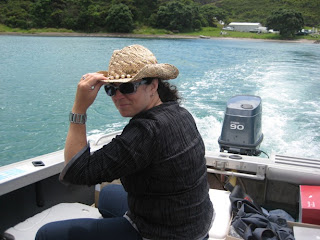 Leaving the bay was rather calm waters, I was reasonably confident the cake would get there in one piece - it had survived the car trip intact. 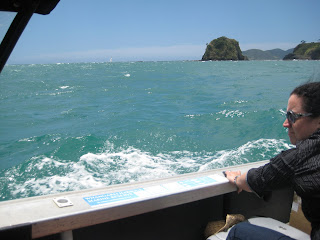 Then as we left the bay and entered open seas to head towards Urupukapuka Island, I became terrified for my cake, we hit some pretty big waves (the groom was being terribly careful), I could see the whole cake vibrating. I can only think my internal supports of one dowel down through all 3 cake boards, as well as individual dowels in each cake saved the day. 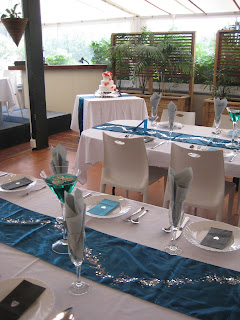 I am still utterly gobsmacked this cake arrived without a single broken petal - I had an extensive repair kit with me, and a few hours to spare. 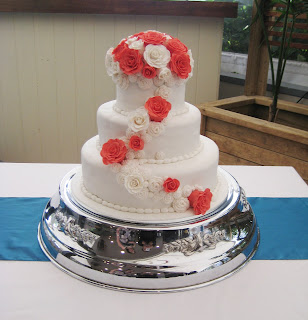 I also did a blue/white/black candy buffet for the wedding. Unfortunately I only had about 10 minutes to set it up. This was due to the Island clsoing to the public when the last ferry left and the timing of the beginning of the wedding ceremony, once the guests had the island to themselves. The back drop of part of the cafe didn't allow me to get the best photos in my 60 second photo shoot. I look forward to the official wedding photographers photos.

Blue candy is not the easiest colour candy to find, I was thrilled to get Macey's milk bottles with blue tops (instead of just the usual plain white) I added personalised stickers to black lollipops and displayed them in a stainless steel lollipop stand from Kiwicakes 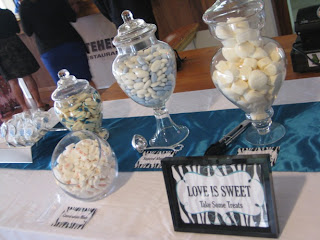 The sugared almonds I picked up in Noumea during my Christmas holiday. 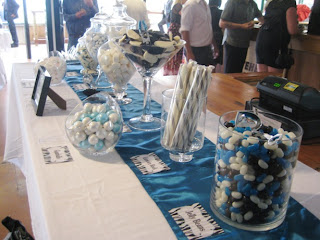 Thank you Mr & Mrs Stanners for letting me be part of your wedding day
Posted by Kiwicakes at 4:03 PM