Post #1 & #2 of my family recipe journey went without a hitch, Mum and I had such fun. This post was not without it's dramas. I chose pikelets for this post. Whilst pikelets for many may not seem extraordinary, my Grandad's pikelets were exceptional. I have many vivid memories of events Grandad attended with his pikelets in tow (always a large batch), whenever we left to go home, not one pikelet was left, the often embarassing thing for anyone else that had taken pikelets, was their plates were virtually untouched.

So how good can a pikelet be?. Grandad were large, airy, a beautiful colour and better yet, they tasted awesome!. 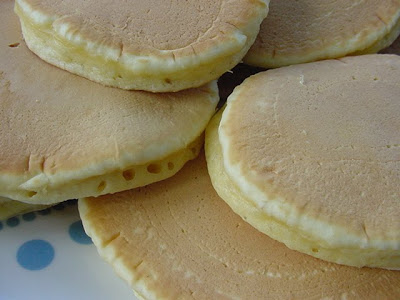 When I went to make pikelets - I couldn't believe, I couldn't find the recipe. Mum did not have it, in the recipe book Granny had begun to write down some of Grandads recipes in, nor was it in her own. I knew that I had it written down. It was in my Standard 4 school recipe book, but I could not for the life of me find that. When I attended Kamo Primary, we had what many might call an "Ag day" although being a surburban primary school, there were not many animals - we did however have all the fun of the fair. I entered the decorated biscuit competition "1st prize" and the Pikelet competition "2nd prize" - why second prize?? when my Grandad's recipe was so good??. Well it was a bit upsetting on my part. Mum received a telephone from the school to say it wasn't fair that she had baked the pikelets for me, as we were supposed to submit our own work, they suggested the pikelets were too good to have been made by a child. Mum told them in no uncertain terms she had not baked the pikelets, in fact she didn't know how to make pikelets. And if they wanted confirmation I had made them myself, they should simply ask me how I made them. They never did - and I was demoted to second place. 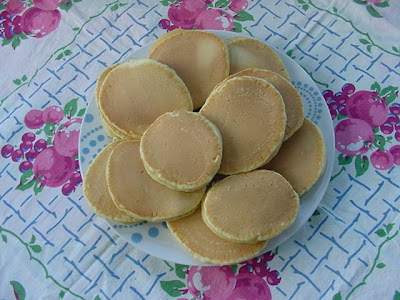 I emailed my Mums cousin Anne (who is the daughter of Grandads brother and Grannies sister - no wonder our family is so small and all looks alike). She had a copy that my great Aunt Margaret (her mum) had written down one day as Grandad made them. Grandad never used a recipe, so she stopped him as he worked and measured everything. Grandad always used 6 eggs, so I chuckled when I saw the recipe Anne had included only 5. I guess there was only 5 left in the egg basket that day.

My first attempt at baking Grandads pikelets resulted in absolute disaster. The printer broke down, so I was unable to print out Anne's email with the recipe. I hastily scrawled it down, as I had a short time on the allotted day to make them. I left out a crucial instruction "mix with beater", I also failed to remember in Grandad language 1 tsp, is not 1 tsp, it is a big teaspoon out of the cutlery drawer and you heap it up. To top it all off, whilst baking my leathery disasters, the electric frypan, which is likely as old as me, broke down during baking. The entire batch batch was fed to the birds and I resolved to start again. AND GET IT RIGHT. 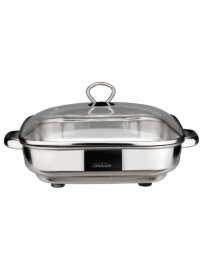 After a quick visit to Noel Leeming, armed with a brand new electric frypan, I was on my way again. I was glad to see Sunbeam now makes a NON TEFLON coated frypan. I'm not sure why they teflon coat everything these days, I'm sure real cooks really don't want teflon on everything.

I had to adjust the recipe Anne gave me, to incorporate Grandads SIX eggs - and I know Grandad always said, "some days you need a little extra milk and some days you don't".

My second attempt was a huge success, this is when I remembered a few things, such as, the recipe makes an enourmous batch, no wonder Grandad was always giving them to everyone - and they taste great warm!

This recipe was my first disaster (albeit a minor one) along the way on my recipe journey, it made me think about a lot of things.

1. Before it is too late, spend some time baking the things you love, with the ones you love - especially when no recipes exist, as was the case, with many of Grandads specialities. You might think you don't need to know how to make that awesome chocolate cake, as Aunty always does it for you, but if you want to have that awesome chocolate cake, when Aunty is no longer around. Make sure you take the time NOW.
2. Even if you have the recipe, spend some time making it with the recipe creator/holder. You certainly learn some intersting things along the way. Not just about the baking (although if Mum hadn't reminded me a tsp in Grandad speak was not actually a teaspoon, I might still be stumped). Mum & I are only three recipes in to our family recipe journey - but already I've learnt a few things about our family, that I am sure I didn't know before. There can be variables in a recipe, if you have them explained to you by your loved one, you can makes notes alongside the recipe that make sense to you (such as BIG HEAPED TEASPOON - when the recipe only says teaspoon)
You may wonder why I haven't made pikelets in the 15 years since my Grandad passed away, the answer is simple. I haven't needed to. My wonderful mother in law Margaret is the world's second best pikelet maker (I have to leave the top award for Grandad). Margaret came in to my life a year or so before Grandad passed away, when I met her son (now my husband of 10 years). I just about fell off my chair when pikelets were placed on the table and they were the spitting image/taste of Grandad's. (Grandad was terminally ill at this stage). I've never seen any one else bake them as well. Margaret knows just how much I love her pikelets and when she bakes a batch, she saves some for me. She is so thoughtful. When I was stuck in hospital for an extended period of time, after the birth of our first child, the first thing she arrived with at the hospital was pikelets.
Whilst I wish Margaret will be with us forever, the laws of nature suggest this is not possible, so I have decided, I too am now a pikelet baker. I am even going to ask Margaret for her recipe and try it out as well.
Here is the recipe I used to create the SECOND successful batch of pikelets. (featured below at the bottom, is the disaster batch, just so you know it was real)

lightly grease pan.
Pikelets should be turned when bubbles appear. 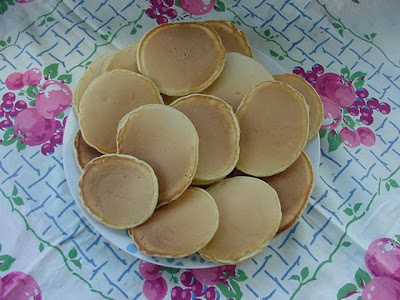 Posted by Kiwicakes at 2:41 PM

Email ThisBlogThis!Share to TwitterShare to FacebookShare to Pinterest
Labels: My Family Recipe Journey