Yesterday after much drama, the Kiwicakes 3rd birthday competition cake arrived. Tracy did a great job, and popped the cake on the courier in the Waikato on Thursday afternoon as planned. Friday morning, when our lovely courier arrived in the driveway, with just a new book for me in hand, I started to panic. After running a trace on the courier ticket, we found the cake had been "mis-sorted" to Auckland. An hour later I was told, "don't worry, the van has left Auckland and there is no Whangarei freight left in the depot", so I race to the depot at 2pm, only to find STILL NO CAKE. After some phone calls, the kind receptionist finds the go to lady for problem solving at the Auckland depot. She informs us, she has herself, not long put the cake on the passenger seat of the next van leaving for Whangarei, due in at 3.30pm. PROBLEM I am due to pick Poppy up from school at 3pm - 40 minutes away. So "Super Mum" (that's my Mum AKA Grandma) to the rescue. She picks up the cake at 3.30pm and drives it out to us at Hikurangi. 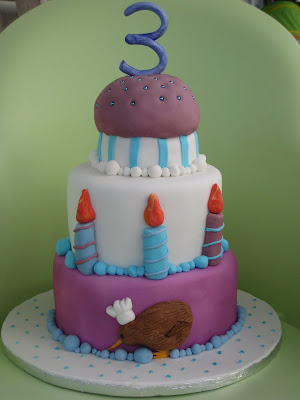 So despite the best laid plans, of having a friend available for photographing me & the cake on a lovely sunny Friday morning. I was left with failing light and poor "Super Mum" having to take the photo. I had great intentions of a lovely setup for the photo, but with a grey late afternoon, it was too dark inside and the artifical light did the cake no favours - so we opted for the cake on one of my dining chairs on the deck. 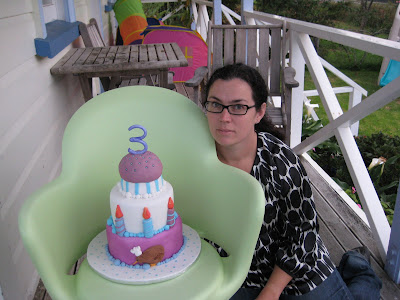 I hope you all enjoy seeing it - please feel free to use the comment section, to leave comments and ask questions.
My children Poppy & Lennox, thought it all terribly exciting, me racing around in a flap, added to their sense of drama. 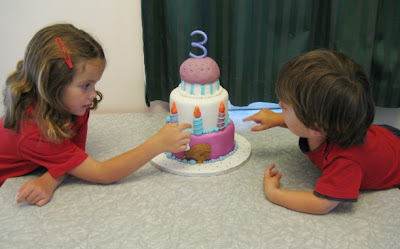 They each chose a candle they liked best and insisted that was the one they wanted to eat. AND YES, we did cut the cake and eat some. I tried all three flavours in quick succession - and ate TOO MUCH! 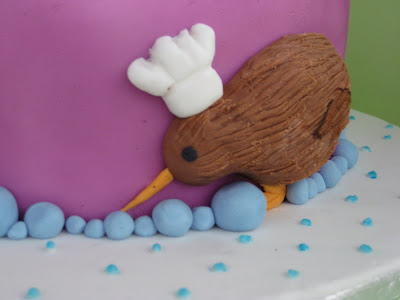 We had three lovely flavours to choose from. My favourite was the chocolate with strawberry buttercream filling. "Super Mum" liked the Citrus cake, which turned out to be lemon (because Tracy forgot she had put orange on her entry). Poppy liked the vanilla cake with cookies & cream filling.
I was impressed with Tracy's buttercream filling. After speaking to her on the telephone last night, I was able to discuss her technique. After she has mixed her buttercream, she adds melted white chocolate to the icing. Then refrigerates the cake before covering in fondant. This ensures she has a nice firm cake for covering, with no slippage or movement at the filled area. It tasted great too!. Tracy also tells me, her daughter Shayna (who helped with the original design drawing) helped her hand roll the fondant balls around the base of each tier. 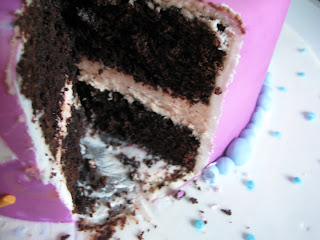 Here's another look at Tracys winning entry & Tracy with her cake 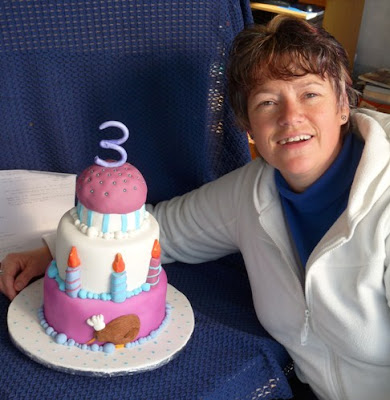 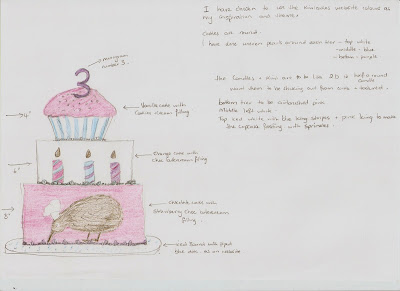 Posted by Kiwicakes at 8:08 AM

Email ThisBlogThis!Share to TwitterShare to FacebookShare to Pinterest
Labels: competitions