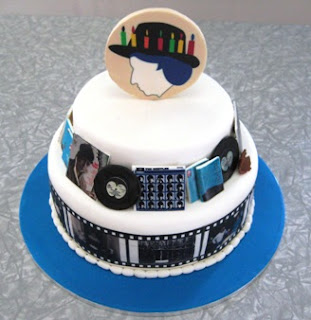 On May 6th my hubby turned 40. A birthday I never imagined when I met him 18 years ago. We had a party for him on Saturday night, at a local bar & restaurant - Vinyl. 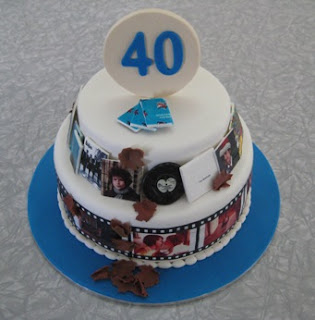 In the time I've known my hubby, music has always been one of his biggest passions (listening to it, not making it). So when I started to think about making this cake, I wanted to include some of his interests. He is also a poet. (self published for book no#1 and book #2 is currently with a publisher) 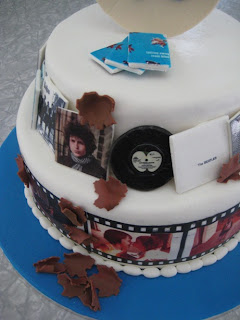 Everything on the cake is 100% edible, from the miniature record covers, to the records and books. The brown leaves represent the leaves from the cover of his first book (called Falling Away from Blue). The cover photograph is the liquid amber leaves from the tree next to our house, against a brilliant blue sky. 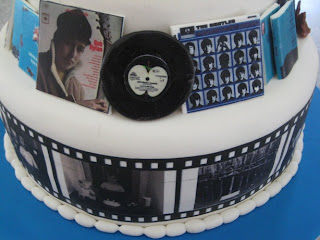 As is so common these days, the invites for this event were sent to most guests via Facebook - the image used on the topper was the Facebook Event picture. For those of you that cannot tell, it is Bob Dylan. Some of the baby & childhood photos around the base with the filmstrip background were used on the Facebook Event page, to give the guests a chuckle at much our boy has grown.

When it came to cake flavours, it was left to me to choose. I thought I'd go for something just a little grown up. The cake flavours were orange & almond for the top layer and gin & lemon for the bottom layer. Both were very well received.

I really had fun making this cake. I think partly because, I didn't have any mistakes or hiccups along the way. Apart from not having enough time to really plan what I was making before I started, i think it turned out pretty good.
Posted by Kiwicakes at 3:28 PM