How to use a silicone mould 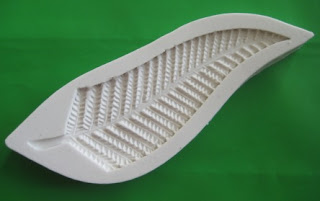 This short tutorial shows how to use a silicone mould. I am using a silver fern mould, but the principles are the same, no matter what shape your mould. 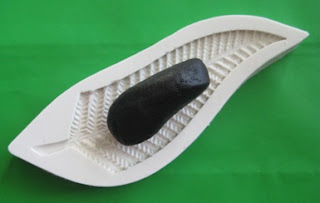 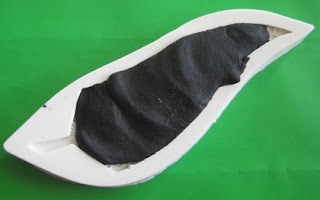 Quickly press down in to mould, to see if the amount you have is too little or too much. 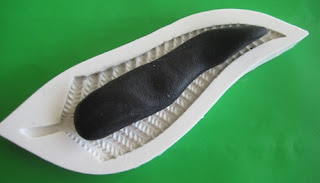 Once you have the correct amount of fondant for your mould, roughly shape it in your fingers to the shape of the mould 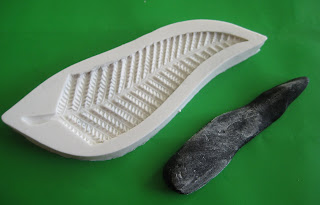 Then dust the fondant (not the mould) with a little corn starch, potato flour or icing sugar. 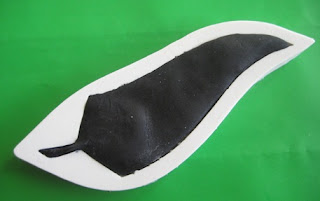 Press to fill the mould, you only need press gently. If your icing if very soft & squishy, it may stick. If it does, it is far quicker to start again, thean to mess about trying to unstick it. knead a little corn starch or icing sugar in to your fondant if it is very hot & sticky.

To release the shape from the mould, turn over on to a work surface or the palm of your hand, and peel from one end, moving along the length of the fern. The finished shape may show some cornflour on it, this can be brushed off when the shape is dry, or you can use a little clear alcohol on a brush (NOT WATER!) 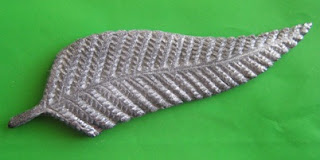 However if you wish to cover in lustre, such as I have here (I've used starlight comet white) there's no need to even worry about brushing the cornflour off, as you'll never see it.

Our full range of silcione moulds can be used with fondant icing, melted chocolate or gumpaste. I mostly use fondant, as it's works best on cupcakes & cakes. If oyu need the item to stand up and set hard, then you need to use gumpaste or add a hardener such as tylose or gum trag to your fondant.
If you use chocolate, it will have a matte finish, as the interior of the silicone moulds is not polished. However for items such as the paua shell this doesn't matter, as the entire surface is covered with lustre.
Posted by Kiwicakes at 4:03 PM

Email ThisBlogThis!Share to TwitterShare to FacebookShare to Pinterest
Labels: How to, kiwiana, silicone moulds