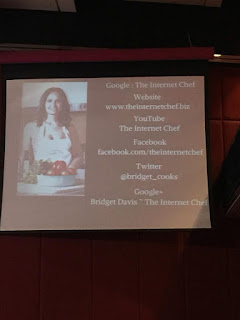 During our Food & Wine Cruise with P&O on Pacific Pearl, there were some great cooking shows in the Marquee theatre. Bridget Davis The Internet Chef was highly entertaining. This first show was aimed at no bake desserts. 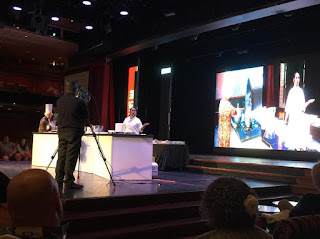 The first poor lady up on stage faced seized chocolate 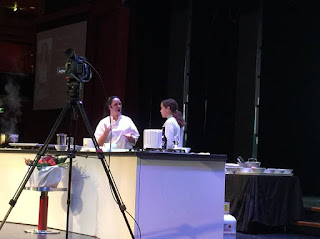 So when my daughter Poppy went up on stage, she was determined to not seize her chocolate 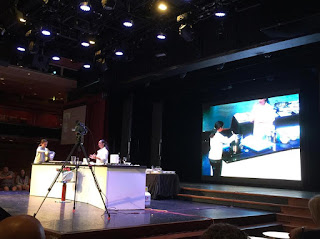 And she didn't. Bridget made with her a cranberry and pistachio white chocolate bark. 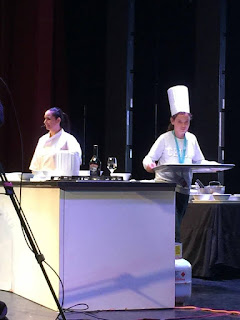 Poppy was given it on an enormous catering tray to take back to her seat while it set (everything int he kitchen is enormous, as they make things on such a large scale) 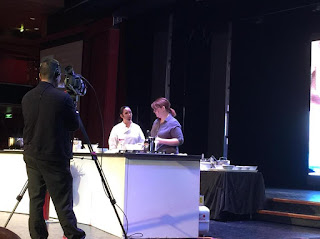 The audience was never short on volunteers. 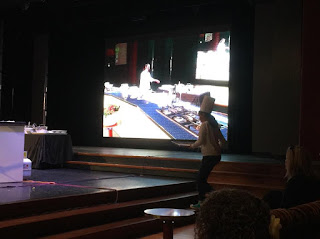 At the end of the show Poppy took the bark up on stage. Sadly for everyone else in the audience it hadn't set yet, so the whole piece had to come back to our room to go int he fridge. Lucky us! And it was mighty tasty 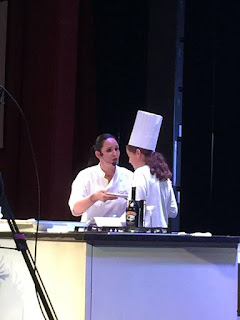 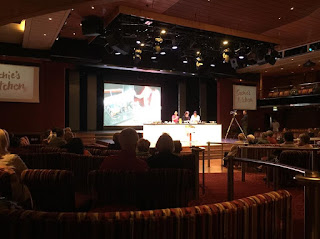 Sachie Nomura from Sachie's Kitchen was up next. She had some simple yet wonderful techniques on how to cut cabbage finely, how to butterfly chicken pieces for teriyaki and so much more. I was thrilled to be able to purchase a signed copy of her cookbook on board. 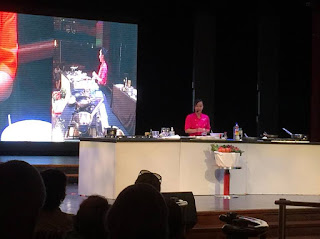 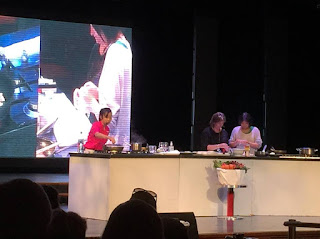 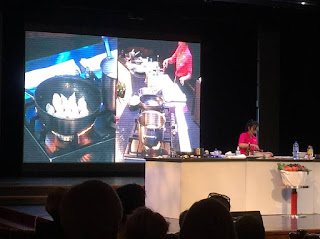 Sachie made one of my absolute favourites - dumplings. I could eat these until I pop! 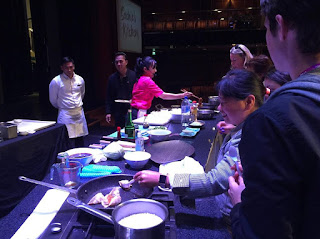 At the end of her demonstration everyone was invited up to taste. Since returning home from our cruise I have devoured Sachie's book, reading from cover to cover and attempting quite a few recipes. 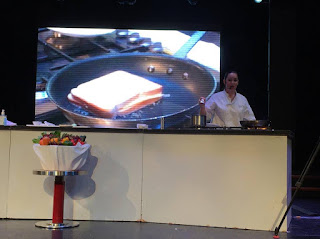 Sunday morning Bridget was back on stage for "pan frying". First up she showed us how to make a cheese sandwich - now I guess everyone was thinking I don't need to know how to fry a cheese sandwich, but that's where you're wrong. Bridget's cheese sandwich was amazing. She used an Emmental type sweet nutty cheese along with a cheddar. AND she placed cheese inside & outside of the sandwich. 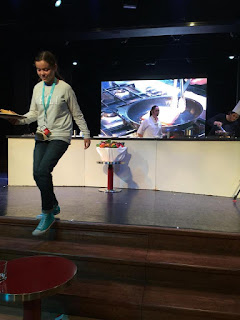 Poppy was sitting in her seat saying "I'd love to try that" - so when bridget called out who wants to try this, and no one did (must have all been a little shy). I called out yes. As Poppy had been up on stage the day before Bridget recognised her and called out "come on up Poppy" 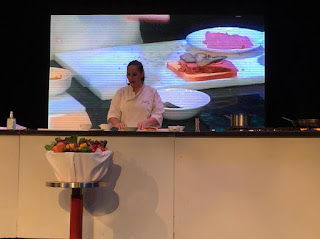 Then it was my turn to salivate. Bridget made a Cubano, made even more famous on the movie "Chef" 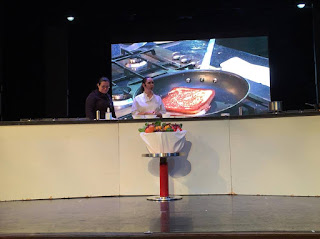 So when Bridget called out for a helper, I had to say yes And of course I got one of the chefs hats too - don't I look snazzy. 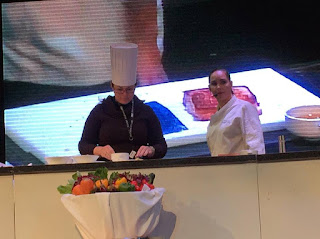 I layered the sandwich with tasty cheese, ham, pork and pickle. 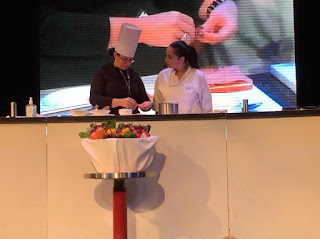 LOTS of cheese - I love cheese! 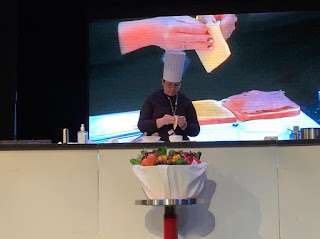 Then it was a matter of  frying the lavishly buttered )on the outside) sandwich. 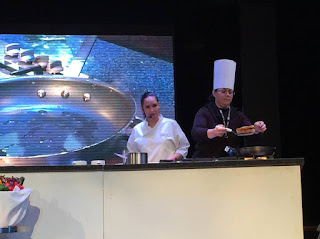 Apparently I was a natural - and this is the result 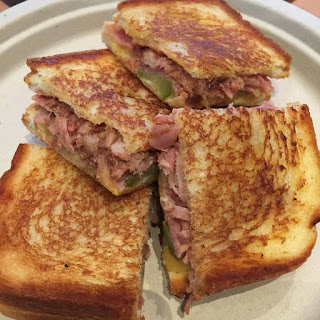 As we'd just shared Poppy's cheese sandwich with those around us. We also shared this sandwich too. After all breakfast aboard the cruise had left us somewhat full already. Lastly Bridget showed us a salted chocolate sandwich, which was truly decadent. A young boy near us bought a piece over to us int he audience (as we'd shared our sandwiches with him). Just as well it was still a few hours till lunch! 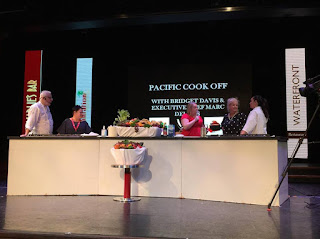 Another fun event was the Pacific cook off. With the Pacific Pearl's executive chef Marc - a very tongue in cheek funny French chef and Bridget Davis the Internet Chef. Hosted by one of P&Os entertainment staff, who kept the jokes coming and attempted to fluster the chefs. 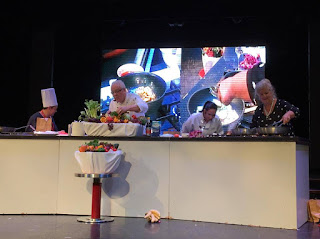 The chefs each had a audience member helper, a mystery bag of ingredients and access to the ingredients on the bench in front of them. Chef Marc decided bananas were useless and tossed them to the stage floor. It was at this point memories of the Muppet's Swedish chef came flooding back and I laughed even harder. 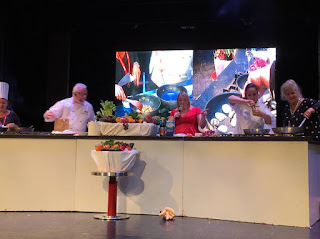 The Pacific cook off was won by Internet Chef Bridget Davis and her cooking partner. It was decided by audience vote, Grandma Kiwicakes had said to me, we're sitting in the front row, Bridget can see us, we'll have to vote for her. However we didn't have to worry, Bridget won us over with her dish. Sorry chef Marc! The prize aside from the glory was a culinary bag of goodies for the audience member helping.

If you love food and you love holidays, I can highly recommend the 3 night short break P&O cruise leaving from and returning to Auckland. For the price of your fare, you receive your room and all meals (unless you opt to eat at Salt Grill - see part 1 of my post). All shows, gym, pool, kids club and many activities are included. Optional extras can include things like wine tasting and cocktail classes, but these are reasonably priced in the $16-25 range

Posted by Kiwicakes at 1:54 PM