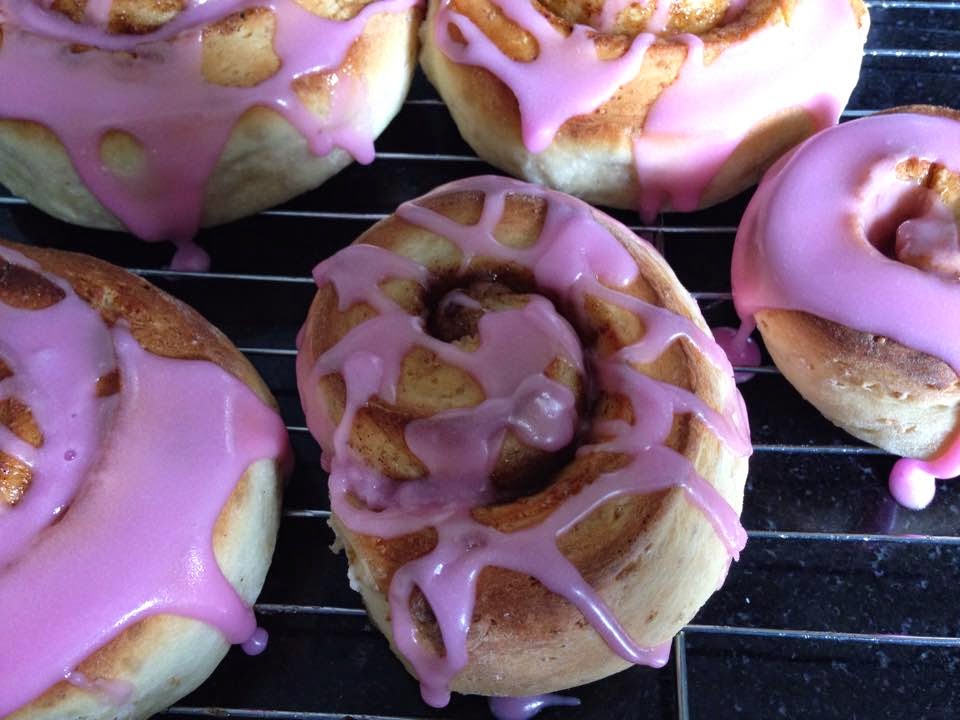 Until now I'd never made Chelsea buns before, I'd more than eaten my fair share of them. If you've followed my family recipe journey over the years, you'll know my Grandad was an amazing baker. He used to make these for me (even my own special batch, with no raisins, which as a child I didn't like in my buns)

These were easy to make and made the house smell amazing. They were enjoyed by guests. for morning tea - just as well, as the recipe made tons.

I've searched all of the family recipe books and I simply cannot find the recipe, so I used a recipe from our good friends at Chelsea (reprinted with their permission)

Icing
1 cup Chelsea Icing Sugar
Hot water
Raspberry essence to colour and flavour icing pink (my addition)
Method
To make dough:
Place all the dough ingredients into a large mixing bowl, then using a wooden spoon combine the ingredients together until a dough mass has formed.
Tip the dough out onto a lightly floured surface and knead for 10 minutes until the dough is smooth and elastic in feel. Kneading is the trick here!
Lightly oil a bowl large enough to allow the dough to double in bulk, then put the dough in the bowl and cover with plastic wrap. Leave in a warmish place for 20 minutes.
Gently knock back the dough in the bowl by gently folding it back onto its self.
Cover again with plastic wrap and leave for 20 minutes then place into the refrigerator overnight.
To assemble buns:
Roll dough into large rectangle.
Use pastry brush to brush the melted butter on and then sprinkle brown sugar and cinnamon over pastry.
Sprinkle sultanas (that have been soaked for 5 minutes in boiling water) over.
Roll up dough and cut into 12 pieces. Bake at 190°C for 20-30 minutes.
Mix together icing sugar and water until a drizzling consistency is reached then drizzle over buns when cool.

Extra tips
As an alternative, you can also glaze with Chelsea Honey Maple Syrup.