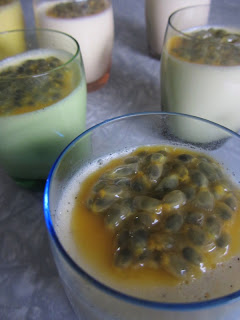 I have a list of desserts I want to make, that is so long, I amy never ever get to the end of it. Over the weekend, I got the chance to make Panna Cotta, which I'll confess I haven't ever made before. It was so super easy, I may be guilty of not having considered it previously due to it's fancy name.

This recipe was passed on to me by a friend, I've since been looking at Panna Cotta recipes all over the web and I'm now tempted to also try substituting the milk for (1) buttermilk and (2) coconut milk. So it's back on to my dessert list of things still to try.

Boil everything together, remove from heat and add gelatine. I didn't bother blooming the gelatine, I simply dropped it in and whisked and whisked and I had no lumps after doing this.

Chill 3-4 hours. Serve with passionfruit pulp. Berries work very well too. You can also chill in a silicone mould and turn out on to a plate. I chose to serve mine in some retro dimple coloured glasses. 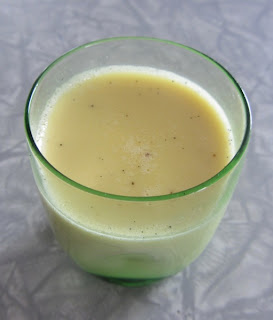 Posted by Kiwicakes at 2:35 PM

Email ThisBlogThis!Share to TwitterShare to FacebookShare to Pinterest
Labels: recipe