Lego party for my 6 year old

Last Sunday was my little boy's 6th birthday. He decided on a Lego theme for his party. I had an idea in mind for his cake, which I did get to do. However I had originally intended to make the minifigures from icing, seeing as I had a mould for it. This was not to be, when my soon to be 6 year old started naming all of the Star Wars Lego characters he wanted on his cake. I knew I didn't have a spare 20 hours to make them from icing - let alone the artistic skills to draw those faces!. Realising in the grand scheme of things I wouldn't lose any Mummy points if I used real lego (which I think my wee man actually preferred) - I made the decision to cut myself a break for once. My wee man was proud to have created the spaceship on the cake board himself. 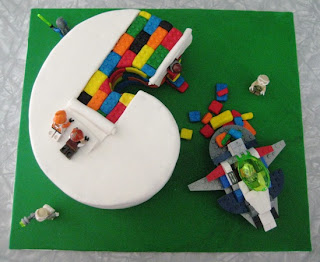 To make matters worse - my wee man does not like cake at all SHOCK HORROR! - so I made his cake from "Lolly Cake" below is a photo of how I cut the area from the NO#6 to allow for the Lego bricks. I made the lego bricks using this building block mould  they are made from coloured Satin Ice fondant. The cake is covered in White Satin Ice fondant. Being lolly cake, it was a little hard to get a smooth surface. 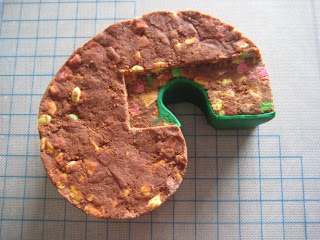 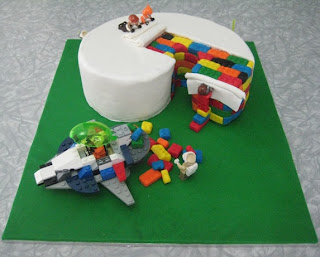 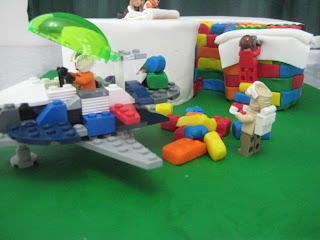 My wee man adores all things Lego, so we had a mixture of Lego City party ware and Star Wars Lego party ware 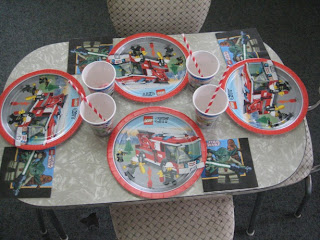 I realised sadly when I saw the boys sitting at my miniature retro formica table, it may be the last party where my kids can use it - by the time he turns 7 they will be too big. I guess I'll have to store it for a decade or two until I get some Grand babies 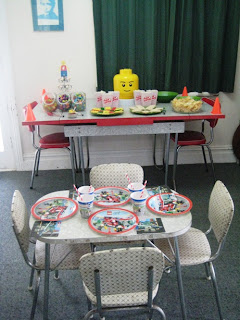 I love some of the lego party tables I've seen on blogs and magazine layouts recently. I would have loved to have created a larger (fuller) table, but in reality with only 3 guests coming to the party. I had far too much food as it was. 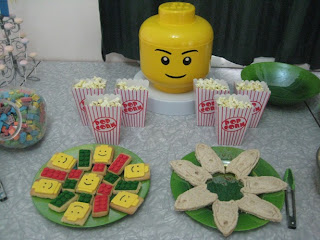 The left over cookies (there were more than this) went to school the next day, as his actual birthday fell on Monday). 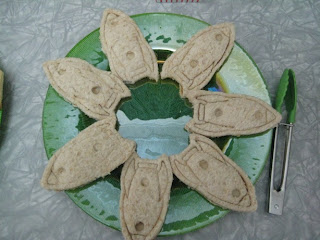 I love the Tovolo cookie cutters, they emboss as they cut. These rocket ship peanut butter sandwiches were a hit. Cutter can be bought here. 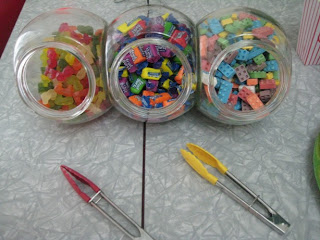 The building block candy was from Kiwicakes, as was the candy jars & tongs. I was thrilled to recently find the "Jelly Joiners" at the supermarket. They look like building blocks and the kids can have fun joining them together to create new flavours (per the instructions on the pack). They are from the Natural Confectionery Company. 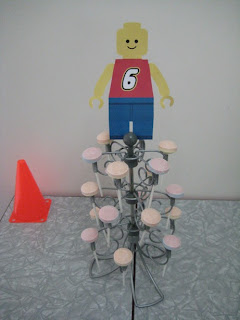 The Lego man, I downloaded from the winksanddaisiesblog I also used them for the treasure hunt, taping a Fruit Burst lolly to the rear of each. Be warned they take a while to cut out, if you use a lot of them. 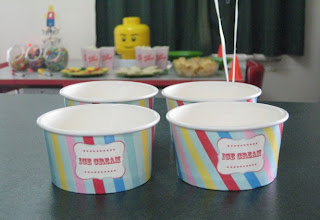 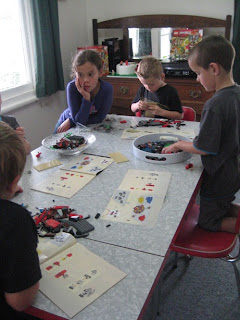 July is never great weather for parties, so I planned ahead and bought 4 Ninjago Lego sets at 50% off when Farmers had a sale. It's just as well I did as the weather was terrible. After the food was eaten, the treasure was found and the Pinata had spilled it's guts, the party guests had a quiet - almost hour putting their Ninjago Blacksmith shops together. Which for 4x 6 year olds, I thought was pretty amazing to sit quietly for so long.

I bought the small crayons on Trademe and packaged up using tags, also from winksanddaisies blog and the lego Star Wars stickers are from Kiwicakes for take home gifts for the guests.