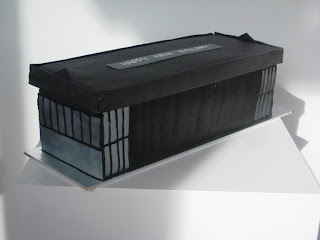 Many many moons ago - well around 10 years ago, I made a cake shaped like the then Geoff Wilson Gallery at what was the Nortland Polytechnic. Last week the new Geoff Wilson Gallery opened at what is now Northtec. On both occasions my hubby asked me to make the cake (as on both occasions he was in charge of the gallery). So I set out on what would be a 16 hour cake making journey. Now many of my customers may well have been able to create this quicker, but as I now only get to make around 6 cakes per year, I'm not super fast. It wasn't perfect, but towards the end of the project FATIGUED would have described the state I was in. The cake consists of 4x 11x7 sheet cakes, stacked 2 high. The roof is one 13x9 sheet cake, cut in half horizontally. Iced with black Satin Ice. The side walls of the gallery are licorice (as the real version has black corrugated metal sides). I found large rolled sheets of licorice from New Generation Licorice to use for this.
The cake was Pistachio flavoured (5 hours of baking) with pistachio buttercream. And I was surprised to find it was almost all eaten on opening night (we served large platters of cake adroned with small pieces of licorice) The front and back end of the galleries are different, my cake photo is actually the back entrance to the gallery, with the large picture window at ground level, for viewing through - from the covered walkway. 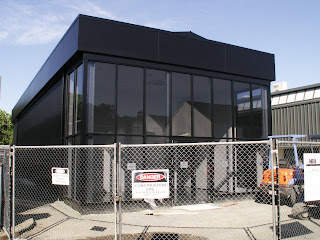 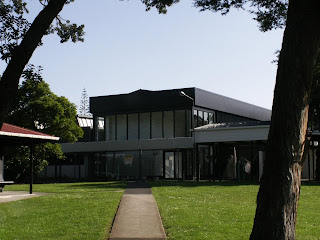 The photos of the gallery were the working photos I had (the scaffolding was removed on the day of the opening).
Posted by Kiwicakes at 3:52 PM

Email ThisBlogThis!Share to TwitterShare to FacebookShare to Pinterest
Labels: My cakes, my life