My cake filled Saturday - and the best ever chilli chocolate

Saturday was a day of cake, cake, cake and more CAKE!. My day started with a 5.15am wake up call, to get on the road to Auckland, as I was demonstarting the Cricut Cake machine to the Waitakere Cake Club. I love visiting the girls at Waitakere, they always make me feel so welcome. I had intended to take some photos for you, but as per usual, the morning whizzed past in a blur and before I knew it, the hall was empty and the floors were being swept.
After a quick lunch, I whizzed over to visit my online friends Kevin & Tracey from Chocolate Earth. They opened a brand new store in Clyde Road Browns Bay - October 1st. It's funny, it was the first time I'd met them in person, but we chat online so often, they feel like old friends.

The new shop is amazing. I don't get over to Browns Bay much (I do recall a visit to South Pacific Pictures at the studio for Shortland Street studio in the 1990s and a couple of visits to the Sunday markets over the last decade, but that's about it). For those of you that haven't been to Browns Bay, I suggest you plan a trip, the beach is right there, smack bang alongside the shopping area, so you can take the kids along for the ride. As I wandered the length of Clyde Raod, I was struck by these shoes, outside a shoe store, I thought they screamed paua shell colours, I envisaged myself wearing them for all of about 2 seconds and then continued on. (they were a lot more purple metallic in real life, than photo portrays) 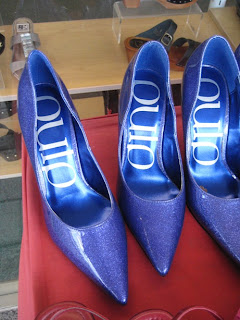 Back to the new store..... I was treated to a hot chocolate, made with liquid chocolate, it was very yummy and one I'd have again in a heartbeat. I chatted with Kevin out the back of the store for a good while, in which time I watched him decorate a cake, make parchment paper cones at the speed of light, all while keeping an eye on an enormous bowl of melted white chocolate. 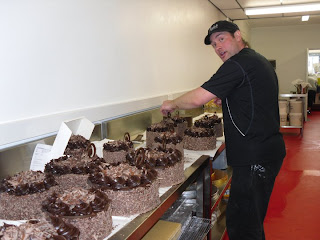 He also showed me some of the photos of his latest creations. The new store has the most amazing decor. Black & orange with classy cabinetry showing of their stunning range of cakes. And on the wall above the counter is a huge flat screen tv, which has a slideshow of some of Kevins creations. It can apparently show live feeds from the kitchen when interesting things are happening. 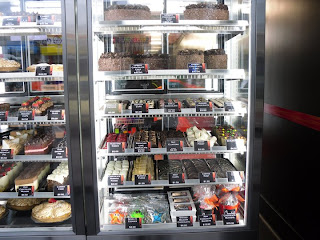 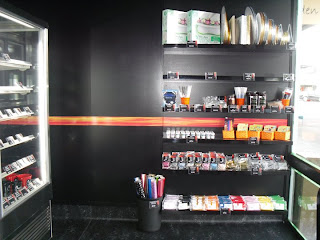 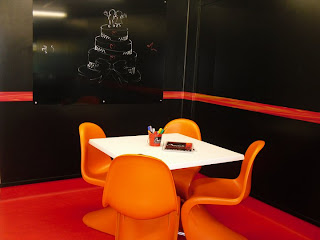 You can view Kevins amazing work on his website http://www.cakes.co.nz/ Kevin is a dab hand at 3d cakes and his airbrushing talents are legendary. He pioneered the paua airbrush technique in NZ. 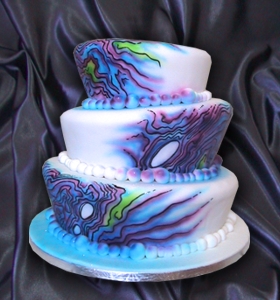 From his website, you'll be able to follow his links to you tube, to see some pretty momentous cakes being created, including one that used a rubbish bin for a chocolate mould and one heck of a lot of chocolate. You will also find him on facebook. 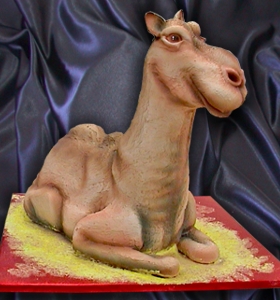 Kevin kindly granted his permission for me to repost his pictures here for you all to see. 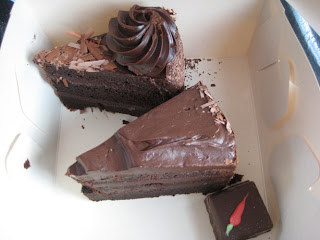 As I was leaving Kevin gave me a box of goodies to take home, a slice of his upbeet chocolate cake (it has beetroot in it), as well as a slice of his flourless chocolate cake. And a rather large Chilli chocolate. Apparently 1 round chocolate cake weighs 3.5kg, as he was telling me this, I lifted my take home box up off the counter, and I could see what he meant, there was a lot of chocolate in  that thar cake!
I snapped a photo of them on my knee in the car, in case they didn't make it home to Whangarei in one piece. (which they did) 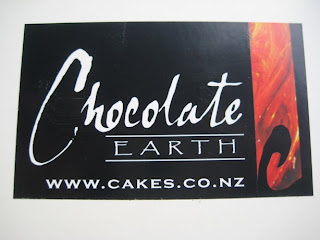 Now what Kevin didn't know at the time, is I LOVE chilli chocolate. I am going to go out on a limb here and say Kevin's was the best I have EVER tasted. The centre was as smooth as silk and the chilli hit, was just perfect. If you're a chilli chocolate lover, you have to get yourself over to Chocolate Earth and get some NOW!.
When I got back to Whangarei I cut the point off each chocolate cake to taste test, It was hard to pick a favourite, from just looking at them, I thought it might be the flourless that won, but for me it was the "upbeet" chocolate cake.
Tracey told me as I was leaving the flourless chocolate cake is great microwaved, the ganache makes a sauce once heated. In Tracey's words "it's a self saucing pudding" - so I tried this with the remainder and in one word DIVINE!.

I whizzed back to Whangarei tired & happy, to collect my eldest child, who'd been disco-ing at the home of "The Whole Cake & Caboodle" for Miss Tessa's 7th birthday. Never to shy to ask for cake, I asked for a piece of chocolate orange to take home, as it's one of my favourite Caboodle's cakes.
The Whole Cake & Caboodles work can be found here on Flickr. 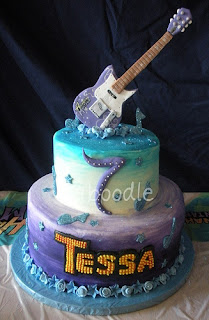 Lucky me, I was treated to an enormous plate of chocolate cake, orange chocolate chip as well as some gorgeous disco cupcakes. Well that's a lot of cake for one girl for one day. Nothing to do but eat it of course! (I did share)
Posted by Kiwicakes at 9:39 PM

Email ThisBlogThis!Share to TwitterShare to FacebookShare to Pinterest
Labels: chocolate, Day in the life