Many of you have asked how/why I started Kiwicakes. There isn't one simple easy answer. A huge contributing factor would have to be my family's love of baking (and eating).
Many of you may not know that I work all day, every working day, alongside my Mum (aka Grandma Kiwicakes). During the course of a working day our conversation will often lead to family history or baking - or both. I thought it was about time I started documenting some of our family recipe history before it was too late.
The posts will encompass not only recipes, but family history and amusing stories.

My Grandad - Donald Luke (That's - Grandma Kiwicakes' - Daddy) was the most amazing baker. He married my Grandmother Alexanderina Nicholson Wilson (She was supposed to be born a boy, named Alexander. When my Great Grandfather went to register the birth, he panicked and added "ina" to the end. She was only ever called "Ina" in her lifetime). My Grandmother was a terrible cook, we used to joke she could burn water - because she did in fact do this once. Yet it is to her I owe great thanks, as she was the one that wrote down Grandad's recipes, somewhat covertly. Grandad NEVER used a recipe. He just pulled out his ingredients and away he went. I used to watch in awe, as without fail, everything came out perfectly. My Grandad passed away when I was 19 (that's 15 years ago now). Yet I can still hear his voice when I asked " what about the recipe". He would say "Oh you don't need one - it's just a sifter full of flour". I can recall thinking to myself how variable a sifter full of flour could be. 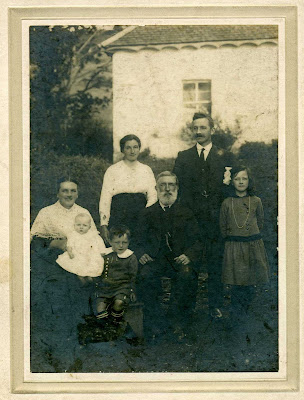 (Photo taken in front of March cottage, Strachur. Sitting is my Great Great Grandma Luke - she is holding my Grandad Donald. Standing are Great Grandad Lachie Luke & Great Granny Agnes Luke (nee Walker). The two children standing are Duncan and Evelyn luke (Grandad's older Brother & Sister from Lachie's first marriage to Mary Jane McAndless who passed away)
My Great Grandmother Agnes was one that taught Grandad to cook. Grandad was one of 7 children and Agnes was adamant all of her children were going to cook, even her boys. My Great Grandparents were fisherfolk and taught my Mum Betty (aka Grandma Kiwicakes) to fish from an early age. As a result Grandad was a dab hand with fish and had many ways of preserving it.

My Great Grandfather was a yachtsman and worked aboard Thomas Lipton's yacht. 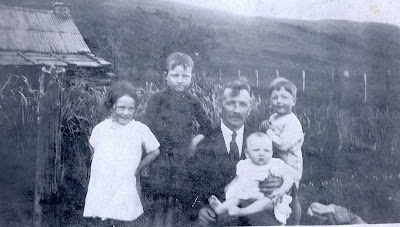 Here is Great Grandad Lachlan McBain Luke (he was called Lachie most of the time). My Grandad is the oldest boy in this photo. Also in the photo are his siblings Betty (left) George & baby Lachie. This photo was taken up the back of the croft. (Grandad's family croft had chickens & a cow, even though they lived in the village)
A wee history lesson thanks to Wikipedia - the free encyclopedia
Crofting is a form of land tenure[1] and small-scale food production unique to the Scottish Highlands and the Islands of Scotland. Within crofting townships, individual crofts are established on the better land, and a large area of poor quality hill ground is shared by all the crofters of the township for grazing.
CroftingCrofting is a social system in which small-scale food production plays an important and unifying role. Crofting is characterised by its common working and thereby strong communities, or “townships”. Individual crofts are typically established on 2 – 5 ha of “in-bye” for better quality forage, arable and vegetable production. Each township manages poorer quality hill ground as common grazing for cattle and sheep.
HistoryA form of land tenure and small-scale food production unique to the Highlands and Islands of Scotland, it evolved from a turbulent period in the areas’ history, the Highland Clearances, largely as a means of sustaining populations. It is found predominantly in the Western and Northern isles and in the coastal fringes of the western and northern Scottish mainland.
The Crofters' Holdings (Scotland) Act of 1886 provided for security of tenure, a key issue as most crofters remain tenants. The Act encouraged tenants to improve the land ground under their control, as it ensured that the control could be transferred within families and on to future generations. 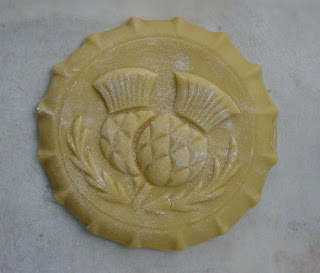 This week I decided to make Grandad's shortbread. Mum and I had fun doing this together one afternoon, instead of working. I always take great delight in taking Grandad's shortbread mould from its box. The box still bears his postal address in Turangi, where it was sent to him by his sister in the mid 1960s from Scotland. The customs declaration states " 1 shortbread mould" at a cost of "GBP 1.80". The mould is not baked in. it is used to press the design in, prior to baking.
The recipe is surprisingly simple and quick to make. In Scotland this was traditionally given at New Years. However we all loved Grandad's shortbread so much, he made it at Christmas, as well as New Years and any other time we could convince him to make it. He regularly made it as gifts for friends. As well as taking it to many "bring a plate" outings. However he was well known for many dishes, so he didn't always take Shortbread. I can remember with pride at the end of any given event Grandad's plates were always bare, never any leftovers to take home. I often overheard murmurings such as "OOH! Donald's brought his shortbread (or pikelets)" 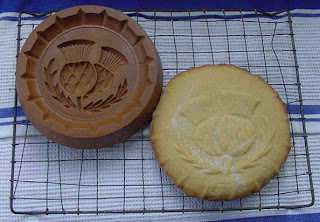 The recipe (I've converted from imperial measurements to metric) - recipe makes 1 round, as per photo above.
250 grams flour
125 grams ground rice (do not use rice flour). Currently I am buying the CeresOrganics brand Rice cereal in a 400g bag to use for this recipe.
250 grams butter
125 grams caster sugar
Cream butter & sugar. Knead in flour & ground rice with your hands. You can press in to a mould as I have done, or simply pat in to round biscuits, or a large round (pricked with a fork, or pattern as you see fit)
Bake at 180C for 25-30 minutes.
Posted by Kiwicakes at 2:30 PM