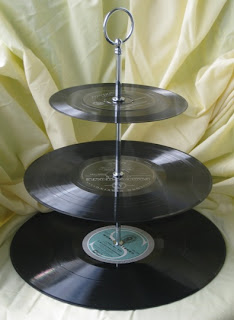 This fun cupcake stand I made from three old vinyl records. (You can buy the stand fittings from Kiwicakes for $15, to make your own here). I picked three records up from an op shop. The top small record I chose for the record label "Love letters in the sand" as it seemed a lovely sentiment. I'm a huge fan of the colour duck egg blue, so I chose the bottom record for the label colour. The mid size records are harder to get, so I had to take what I could get. 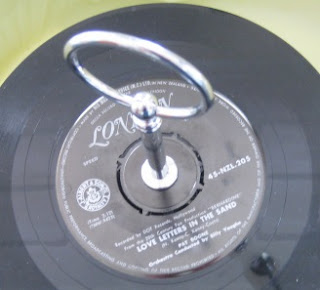 It was fun to make, and really only took less than 5 minutes to screw together. No equipment is required (well other than a screw driver to tighten). I think it would be a great stand for men's parties, as there is so much pretty stuff out there geared towards ladies, but not so much for the guys. It would also be great for dance, 1950's and rock & roll parties. 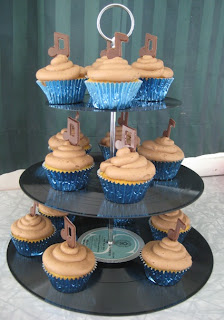 The batch of cupcakes displayed on my stand were made for Father's Day. They are orange flavoured cake - I wanted a grown up flavour. Having only just discovered flavoured drinking chocolate from Cadbury, I decided to try "Caramel Chocolate Cream Cheese icing", and at the last minute I added a dash of Cointreau liquer. Initially I worried the flavour was a disaster. Taste testing it, I couldn't decide if the caramel killed it, or the drinking chocolate did. Or even if the liquer simply didn't work with it. I taste tested it time and time again, and in the end decided it was actually nice. I dashed a sample through to a taste tester (aka hubby) and he declared it good (he is not always complimentary). 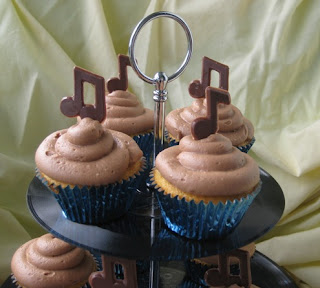 I always taste every icing I make, long before it gets near cake. What was a revelation with this icing - was just how much better it worked in conjunction with the cake. Now some might say that is true of all icings, but not me, I am an eat-it-from-the-bowl kind of girl, so this was really a surprise.

In an electric mixer. Mix cream cheese and butter together until well blended. Add drinking chocolate and icing sugar a little at a time. add cointreau. Beat well.
View My Stats