A recent trip to Farro Fresh in Lunn Ave Mt Wellington (Auckland) set me thinking about Christmas and what treats I would be making. Every year I make some of the old family favourites. However each year I try to make something new and exciting - these new dishes either become a "family favourite" to make an appearance at future Christmases and gatherings or they vanish never to be seen again.

Today I will tell you about one of the dishes that started formulating in my mind (more dishes to come later, I can't possibly tell you about it all today, there's not enough time). 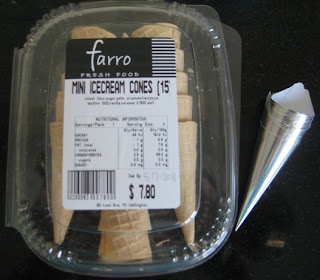 Ever since I went to the cocktail party for the Next Woman of the Year awards, I have wanted to find miniature ice cream cones. And I found them at Farro. I purchased plain (which I used today) and black sesame seed, I recall they also had cones coated with white chocolate on the inside. As I wasn't sure what I was going to do with mine, I bought the plain ones, thinking I could chocolate coat the insides later if I wanted to. They come with pretty little silver paper cones to sit them in. 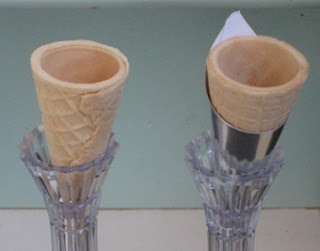 I really had trouble deciding, use papers on no papers. Just in case you're wondering the mini cones are standing in Wilton crystal clear cake pillars. 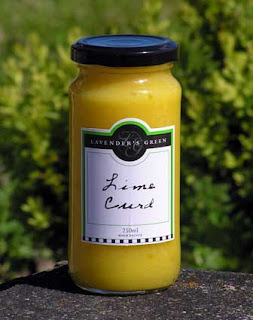 I decided I wanted to trial a savoury and a sweet dish for the cones for a possible appearance on the Christmas 2010 menu. As I'd recently made cheesecakes again in cupcake papers (like the ones I did for Christmas 2009) I thought cheesecake would be a good place to start. I'd purchased Lime curd on my trip to Farro as well mmmmmmmmmmm it's from Lavenders Green and I thought it would marry nicely with the cheesecake. 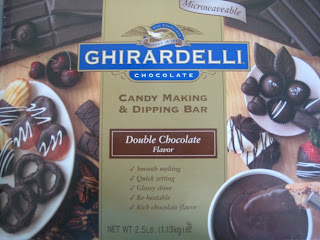 Knowing how ice cream cones go soggy, I thought I'd best break out my swanky Ghiardelli chocolate bar (yes more than 1kg) bought for me, thanks to Grandma Kiwicakes. I melted just a little and filled the inner tips, using a piping bag, then I thought, as I'd melted far to much, I may as well do a swirl around the inside for added taste. 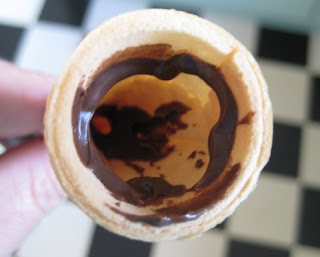 I then piped in a good squirt of lime curd. And topped with cheesecake mixture. I had thought for this test run I would just use cheesecake mixture from the supermarket (Tararua), as I was short on time. I have to say I was pleasantly surprised, I thought it tasted really quite nice and I may not bother making my own Dec 24th, when I'll have enough other things to do.

At this stage I'll admit I had a lot of ideas running around my head for how the finished cones would look. I really wanted to trial the new Dark Silver Stars and Green Christmas tree edible glitter shapes I was convinced my idea for popping a small piece of candy floss on top would be the winner. WRONG! 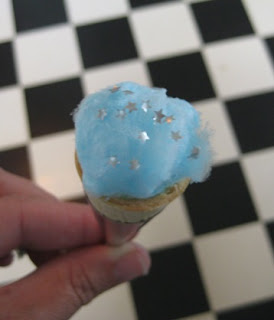 The candy floss was a nightmare to get right, it is so incredibly hard, to place a piece of candy floss on top of a cone and have it look good. I am convinced food stylists must apply each sprinkle to any food using tweezers. Sadly for me time did not allow. I think I probably tried about 10 pieces of candy floss on the cone before I got anything photo worthy. As you try to shape candy floss, it just squishes into a mess, so you have to try to pull and fluff it, whilst trying to shape it ARGH - even trying to describe it is difficult. I also noted when you lifted the candy floss off the cone, the bluish mess on the cheescake below, of melted sugar was completely unappealing. (and I was visualing the steps I would take to eat the cone - I think I would lift the candy floss off and put it in my mouth, rather than put the cone to my mouth) 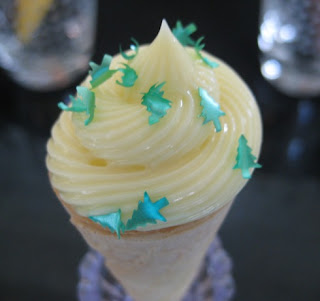 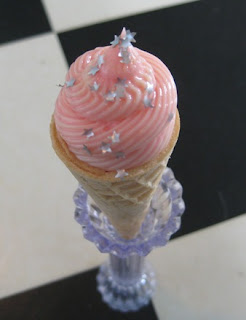 Then I tried a different style of piping with green trees 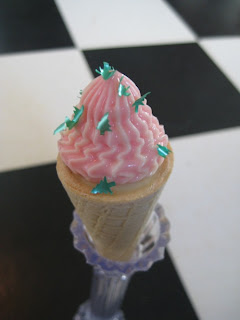 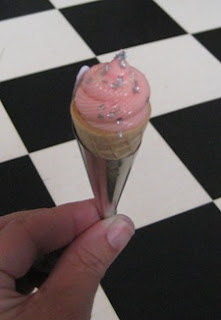 The silver papers although difficult to photograph on the cone really finish them off. Now I just need to work out how I will serve them on the table.
Posted by Kiwicakes at 9:33 PM